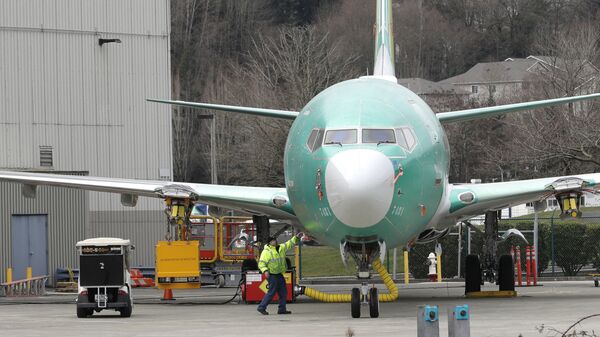 © AP Photo / Ted S. Warren
Subscribe
International
India
Africa
In addition to US safety regulations, Boeing’s 737 Max will now also have to meet the requirements laid out by EU’s aviation safety regulators in order to return to European skies.

Rather than relying on the US Federal Aviation Administration's (FAA) reports of the Boeing 737
Max's airworthiness, the European Aviation Safety Agency (EASA) told both the FAA and Boeing that it has three conditions that must be fulfilled in order for the aircraft's grounding to be lifted.

According to the Financial Times, the EASA requires the following be demands be met before the Boeing 737 Max can occupy its airspace: EASA approval and mandate of any design changes by Boeing, an additional independent design review by the European agency and confirmation that flight crews aboard "have been adequately trained."

"We are working on having the 737 Max 8 return to service as soon as possible, but only once there is complete reassurance that it is safe," an EASA spokesperson noted to the Times.

Indonesia has its own concerns about the plane, many of which stem from the country being the site of the crash of a Lion Air-operated 737 Max 8 in October 2018.

Indonesia Director-General of Air Transport Polana Pramesti told the Times that her country does not have trust in the aircraft at the moment and urged Boeing to realize that it "has to fix not only the aircraft but also we need to increase the level of confidence [among] pilots and passengers."

She went on to say that Boeing needs to recognize that "this is an aircraft. This is not an iPad," and said more information concerning the aircraft's training requirements must be released in the near future.

Wednesday, Sputnik reported the FAA announced it would share its most recent safety analysis with foreign governments on Thursday, shortly after the aircraft went through an update to its Maneuvering Characteristics Augmentation System (MCAS).

"The big worry here is that China is going to use this to start shutting out US aeroplanes, as a way to boost its own aircraft manufacturing industry," a Trump administration official told the Times.

Many reservations concerning the US' review of the company stem from the close relationship the manufacturer has with lawmakers, raising eyebrows about motives of safety versus profit amid what appears to be a rush for the 737 Max to return to international skies. The Boeing 737 Max was grounded worldwide after the Lion Air crash in October 2018 and an Ethiopian Airlines accident in March 2019 killed a total of 346 people.