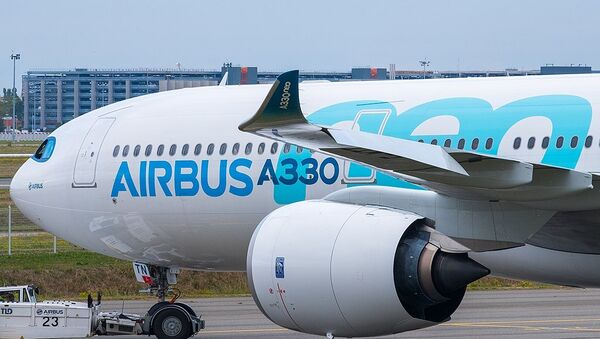 CC BY-SA 4.0 / Alex Cheban / Airbus A330neo aircraft
Subscribe
International
India
Africa
Boeing has been recently facing reputational woes since one of its top jets, 737 MAX, ended up grounded worldwide after two crashes in less than half a year. The preliminary reports suggest that Boeing’s aggressive anti-stall system along with faulty sensors led to both incidents.

As Boeing is planning to present a replacement for the aging 767 and 757 models in the form of new mid-sized aircraft (NMA), already dubbed by some media outlets "Boeing 797", Airbus plans to give an adequate response in a bid to hold the middle market between huge airlines and smaller single-aisle jets.

Airbus' sales chief Christian Scherer told Reuters that the company is planning to fight with the A330neo-800 at the top of middle market and with the A321neo at the bottom. Scherer called the company's approach "left hook, right hook".

Both jets are based on old airframes with new engines, meaning that there will be no use of composite materials allowing fuel efficiency to be increased. At the same time, the use of old frames allows Airbus to keep prices low and enter the market earlier than Boeing's NMA, which will be made from scratch.

"Those programmes [A330 and A321] are both so mature that it gives Airbus pricing flexibility to address this middle-of-the-market segment", Christian Scherer said.

World
Boeing Calls For Limits to US Tariffs Over EU Subsidies

Despite the planned high fuel efficiency due to the use of composite materials, the new Boeing still faces "pressure" from the airlines market to deliver it at a price competitive with that of Airbus for the segment.

The necessity of making the plane affordable is not the only problem Boeing faces. The American aviation giant has been struggling recently to tone down the scandal around two crashes of its top-tier 737 MAX jets within 5 months. The preliminary report has suggested that the jets aggressive anti-stall system, pulling the airplane's nose down in high-angle of attack scenarios, could be behind both incidents.

The system allegedly sent both planes into uncontrolled dives with its actions after it started receiving incorrect data from the faulty angle-of-attack sensors. At the same time, the pilots of the planes either were unaware of the system or didn't know how to switch it off completely.

The global grounding of the plane was initiated after an Ethiopian Airlines 737 MAX crashed in March 2019, less than half a year after a Lion Air 737 MAX crashed in October 2018. The two incidents claimed the lives of 346 people.

Boeing has since stated that the company has modified the MCAS software, making it less persistent in its attempts to affect a plane's behaviour and easier to be controlled by the pilots. The aerospace giant added that it had tested the updated system in some 100 test flights.

Despite these steps, Boeing has suffered not only reputational, but also actual losses in terms of loyal clients. The giant's second largest civilian client, the airline Flydubai, announced at the end of April that it was considering switching to Airbus because it was unclear how long will it take for Boeing to make its 737 MAX safe to fly again.