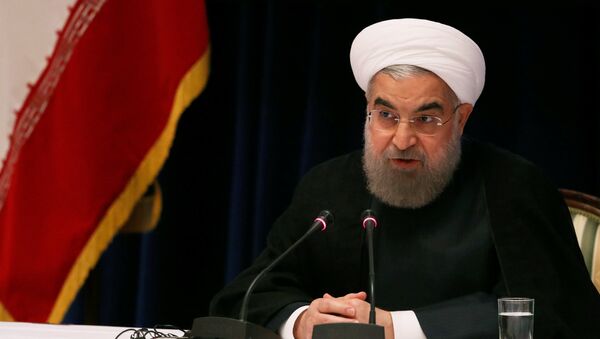 © REUTERS / Lucas Jackson
Subscribe
International
India
Africa
Massoud Shadjareh, the founder of the Islamic Human Rights Commission, joined Radio Sputnik’s Loud & Clear Monday to discuss tensions between the US and Iran after US President Donald Trump threatened to officially “end” Iran if it “wants to fight” this weekend.

Tensions between the US and Iran escalated earlier this month, when the US imposed more anti-Iranian sanctions and sent an aircraft carrier strike group, a squadron of B-52 bombers and Patriot interceptors to the Middle East in response to what Washington called a potential threat from Tehran.

​"If Iran wants to fight, that will be the official end of Iran. Never threaten the United States again!" Trump tweeted on Sunday.

​However, when asked by a reporter outside the White House Thursday whether the US would go to war with Iran, Trump responded, "I hope not," a glaringly different tone than the one he adopted over the weekend.

"He [Trump] comes in to office saying he is really against the war in Iraq, but he [appoints] exactly the [same] people who actually [approved] those wars and puts them in very sensitive position[s]… His response is like a bully in kindergarten. It really is not becoming of a politician, head of the so-called most powerful nation on earth. He comes out with these knee-jerk tweets, and then the international community gets shocked, and then he comes out and says he's really not going to go for war, war is not an option," Shadjareh added.

In an interview Sunday with Steve Hilton on Fox News, Trump vowed not to let Iran obtain nuclear weapons but also expressed his hesitation to go to war with the Middle Eastern country when asked whether he could reassure the American people that he's not looking for a conflict in Iran.

"I don't want to fight. But you do have situations like Iran; you can't let them have nuclear weapons — you just can't let that happen," Trump said during the interview.

"With all of everything that's going on, and I'm not one that believes — you know, I'm not somebody that wants to go into war, because war hurts economies; war kills people, most importantly — by far most importantly," he continued.

Last May, Trump announced the US' withdrawal from the 2015 Iran nuclear deal, the Joint Comprehensive Plan of Action (JCPOA), reinstating harsh sanctions against the country. Earlier this month, Iranian President Hassan Rouhani said that Iran would begin stockpiling low-enriched uranium and heavy water, which can be used to build nuclear weapons in nuclear reactors. It also said it would start enriching uranium to higher levels than permitted under the terms of the JCPOA.

There is also speculation by some reporters, including David Ignatius, an associate editor and columnist for The Washington Post, that Trump may be purposefully trying to escalate tensions with Iran as part of a bigger plan to meet with Rouhani and portray a "peace maker" image in front of the American people just in time for the 2020 presidential elections.

"This is a very funny way of negotiating with people," Shadjareh said of the speculation that Trump may be provoking Iran in order to later make peace.

"This is not the way to do it… the US military recognizes that it's not [venerable] to go into war. It wasn't venerable to go into Afghanistan, it wasn't venerable when we [the US] went to Iraq. I just don't understand the logic of people fooling themselves and saying this rhetoric is a way forward for bringing peace."

"If the US was treated in this way, people [would] rally. It really is not a way forward. Look at the history of Iran. Iran and Iranians have always come together when they are facing this sort of bizarre bullying… and the reality is, if anything, they [the US] are making the possibility of a negotiation which will bring any sort of win-win situation to the whole region, obsolete. We are sleepwalking into very dangerous space," Shadjareh added.