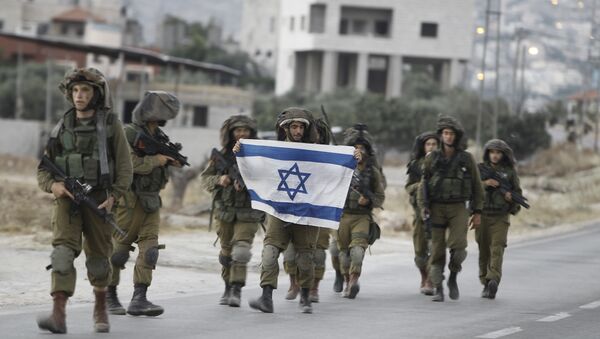 © AFP 2023 / Jaafar Ashtiyeh
Subscribe
International
India
Africa
On Sunday, US President Donald Trump tweeted that “if Iran wants to fight, that will be the official end” of the Islamic Republic. Earlier, however, he reportedly told acting Defence Secretary Patrick Shanahan that he doesn’t want to see the US go to war with Iran as tensions between the two sides are on the rise.

Israel has announced that in the event of a full-blown armed conflict between Iran and the US, the Jewish state would not play an active role and would only join the hostilities if it was attacked by Iran or its proxies, the Israel Hayom media outlet reports.

Israel has repeatedly accused Tehran of maintaining a secret weapons programme and trying to establish a military foothold in Syria, right on Israel's doorstep. Iran denies the allegations, insisting that it only has military advisers in Syria.

READ MORE: US Okayed to Deploy Its Military in Gulf States Amid Iran Row — Reports

Israel Hayom said that the statement on a possible Iran-US war was made during a recent meeting between Israeli security officials and their US counterparts to discuss the mounting tensions between Washington and Tehran.

The announcement comes a day after US President Donald Trump warned in a tweet that if the Islamic Republic “wants to fight, that will be the official end of Iran”, adding, “Never threaten the United States again!”

Speaking to Fox News later that day, Trump took what looked like a more subdued tone by saying that “I don’t want to fight”, but that “you do have situations like Iran, you can’t let them have nuclear weapons — you just can’t let that happen”.

This was preceded by the New York Times citing several unnamed senior US officials as saying that “[President Donald] Trump was firm in saying he did not want a military clash with the Iranians”.

In an interview with the IRNA news agency, Iranian Foreign Minister Mohammad Javad Zarif, for his part, voiced confidence that a war won't break out in the Middle East “because neither we want a war, nor has anyone the idea or illusion that it can confront Iran in the region”.

He was echoed by Iran’s Supreme Leader Ayatollah Ali Khamenei who stressed that “the Iranian nation’s definite option will be resistance in the face of the US” and that “in this confrontation, the US would be forced into a retreat”.

Tensions between Iran and the US further escalated on 8 May, when Tehran announced that it would backtrack on some of its “voluntary” commitments under the 2015 Iran nuclear deal, also known as the Joint Comprehensive Plan of Action (JCPOA).

'Iran Isn't Interested in a Military Confrontation With the US' - Scholar
This was followed by Washington announcing a new round of anti-Iranian sanctions aimed at the Islamic Republic’s iron, steel, aluminium, and copper sectors.

Shortly after, the US reinforced its military presence in the Persian Gulf with the Abraham Lincoln aircraft carrier and a bomber task force to send “a clear and unmistakable message” to Tehran.

Additionally, Washington deployed Patriot missile defence systems and an Arlington amphibious warship to the region, with Iran expressing its readiness to retaliate in case of a possible military conflict.