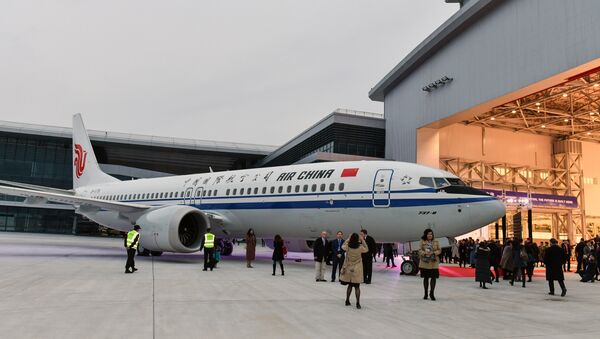 Beijing and Washington signed an accord to improve the mutual certification of civilian aircraft in 2017, but Chinese airliners have still failed to receive approval in the US despite numerous long-lasting attempts.

Chinese officials have attempted to link the certification process of Boeing's 737 MAX to the approval of its own domestically produced jets in the US, Bloomberg reported, citing anonymous US officials. According to the media outlet, Beijing has thereby tried to enter the American market, which has remained closed to it due to aircraft manufactured in the country not having received a green light from the US aviation regulator.

Beijing has long sought to gain certification for its civilian jets, which are rivals of both Boeing and Airbus, to be sold to American firms, but Chinese aircraft have never received it, despite multiple attempts. According to the news outlet's sources, while Chinese officials have never made "overt demands" for their airliners to be certified in exchange for approving Boeing's top jet, "their intentions were clear".

However, the US hasn't budged and Boeing's 737 MAX was eventually granted certification in China, while its direct analogue, the Comac C919, hasn't been given a green light by the US Federal Aviation Administration, which was reportedly approached by US trade officials on the matter. Neither Chinese nor American officials have commented on Bloomberg's report.

Notably, the two countries signed an agreement in October 2017 that sought to improve the process of granting mutual certification to civilian airliners. However, Chinese aircraft have still not received a green light from the American regulator.

At the same time, while the Boeing 737 MAX has faced global trouble following two crashes in less than half a year, China was one of the first countries to ground the plane in March 2019. Eventually, all countries using the jets have ordered them to be grounded until the cause of the crashes has been determined.

The grounding was prompted by the crashes of two Ethiopian Airlines and Lion Air 737 MAX aircraft in March 2019 and October 2018 respectively, which killed a total of 346 people. An investigation has shown that the planes' anti-stall system could have sent them into an uncontrolled dive due to a malfunctioning angle sensor. The sensor allegedly led the system to believe that the plane's angle of attack was too high and forced it to drastically lower the plane's nose.

Since then, Boeing has released a software update, claiming that it has made the system less aggressive, but so far the global grounding remains in effect until regulatory bodies decide whether the jet is safe to fly.