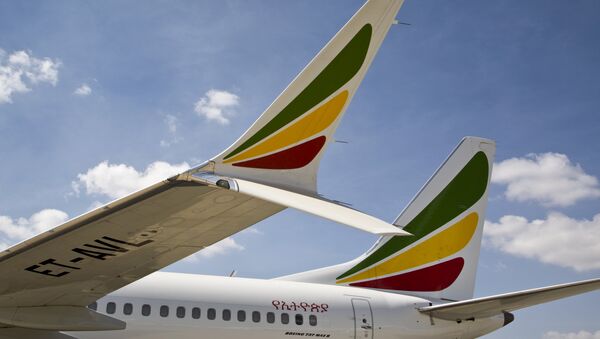 © AP Photo / Mulugeta Ayene
Subscribe
Boeing is looking to address the severe damage its reputation suffered due to two deadly airliner crashes in the space of six months.

Boeing has little precedent to go on as it’s been brainstorming how to pull its 737 Max jetliner back from the brink.

The tragedies, which left over 300 passengers and crew-members dead in two separate 737 MAX crashes in the span of just a few months, resulted in the grounding of the model, dealing a massive blow to the company. Boeing added to its plight by dragging its feet about explaining the apparent flaws with the software subsystem known as MCAS.

Longtime Boeing watcher Nick Cunningham told Bloomberg he was starting to wonder if “this has become too serious and too protracted for the Max to escape unscathed.”

“The longer the crisis drags on, the greater the risk that the cumulative effect will have acted to permanently lock it into people’s memories,” said Cunningham, a founding partner at Agency Partners.

Boeing Hushed Info About Safety Alert Problems With 737 MAX for YEAR - Reports
Boeing is currently finalising a software update, which it will submit to the Federal Aviation Administration (FAA) in a step toward getting the plane back in the air.

The changes will need to be certified by aviation regulators before the jet is cleared to resume commercial flights.

Apart from issues linked to the technical aspects of software patches, rebuilding confidence is another major challenge, as Boeing will need to win over pilots, flight attendants and regulators.

To this end, writes Bloomberg, Boeing CEO Dennis Muilenburg and commercial-airplane chief Kevin McAllister have been hosting regular conference calls with airline executives, with the company summoning Max operators to sessions around the world to explain specifics of the software alterations and discuss pilot training, as well as a public campaign to restore confidence in the jet.

Bloomberg cites Boeing spokesman Gordon Johndroe as stating there have been “no discussion” of a name change, including dropping “Max” and simply referring to the jet family by product numbers, such as 737-8.

“It’s a multifaceted approach to taking the steps necessary to preserve the fleet, return it to service safely and restore any lost confidence that pilots, regulators and the traveling public have had in the Max,” said Johndroe.

The 737 MAX is Boeing’s fastest-selling jet and its main source of revenue. At stake is not just the manufacturer’s image, but the vitality of the jet that accounts for about one-third of Boeing’s profits.

The first crash took place last October in Indonesia, resulting in the death of all 189 people on board. Around six months later, on 10 March, a similar tragedy was reported in Ethiopia, in which all 157 on board died, with both incidents taking place shortly after takeoff.

000000
Popular comments
nobody in theirnright mind will want to fly this thing anymore...
chrrev
11 May 2019, 19:11 GMT1
000000
I would fly if the 737 max was available today. It means that the seat will be cheap and the plane would be empty. The best that can be done with this plane is to investigate and arrest all participants from Boeing and the FAA who certified and managed its training program for the purpose of locking them up for murder and collusion. After the problems are fixed, then the 737 max should be sold to privateers and courier companies.
Rokenbok
11 May 2019, 19:36 GMT1
000000
Newsfeed
0
New firstOld first
loader
LIVE
Заголовок открываемого материала
Access to the chat has been blocked for violating the rules . You will be able to participate again through:∞. If you do not agree with the blocking, please use the feedback form
The discussion is closed. You can participate in the discussion within 24 hours after the publication of the article.
To participate in the discussion
log in or register
loader
Chats
Заголовок открываемого материала
Worldwide
InternationalEnglishEnglishMundoEspañolSpanish
Europe
DeutschlandDeutschGermanFranceFrançaisFrenchΕλλάδαΕλληνικάGreekItaliaItalianoItalianČeská republikaČeštinaCzechPolskaPolskiPolishСрбиjаСрпскиSerbianLatvijaLatviešuLatvianLietuvaLietuviųLithuanianMoldovaMoldoveneascăMoldavianБеларусьБеларускiBelarusian
Transcaucasia
ԱրմենիաՀայերենArmenianАҧсныАҧсышәалаAbkhazХуссар ИрыстонИронауОssetianსაქართველოქართულიGeorgianAzərbaycanАzərbaycancaAzerbaijani
Middle East
Sputnik عربيArabicArabicTürkiyeTürkçeTurkishSputnik ایرانPersianPersianSputnik افغانستانDariDari
Central Asia
ҚазақстанҚазақ тіліKazakhКыргызстанКыргызчаKyrgyzOʻzbekistonЎзбекчаUzbekТоҷикистонТоҷикӣTajik
East & Southeast Asia
Việt NamTiếng ViệtVietnamese日本日本語Japanese俄罗斯卫星通讯社中文（简体）Chinese (simplified)俄罗斯卫星通讯社中文（繁体）Chinese (traditional)
South America
BrasilPortuguêsPortuguese
NewsfeedBreaking
YesterdayFrance’s FM Says Aware of UK's ‘Permanent Opportunism’, Calls BoJo ‘Fifth Wheel’ in AUKUS
YesterdayMayor of Johannesburg Killed in Car Accident - Reports
YesterdayPython Falls From Rooftop in Australia After House Sheathed From Snakes - Photos
YesterdayWatch: SpaceX Capsule With All-Civilian Crew Splashes Down in Atlantic
YesterdayReport: Iran's Top Nuclear Scientist Was Killed by Weaponized Robot in Long-Planned Operation
YesterdayFour Arrested at Justice for J6 Rally, No Clashes With Counterprotesters
YesterdayAfghan Human Rights Commission Says Unable to Work Due to Taliban Interference
YesterdayFacebook CEO Zuck's Vax Promo Scheme Became 'Cesspool' of Misinformation, Minions Warned
YesterdayUS Air Force Reveals Conditions to Lift Decades-Long Ban on F-22 Raptor Exports
YesterdayOrganiser of 'Justice for J6' Rally in Calls on Protesters to Respect Law Enforcement, Media
YesterdayLion's Den vs Bunch of Kittens: Ex-Trump Press Sec Spicer Sad Because Reporters Treat Psaki Better
YesterdayPolice Bodycam Footage Shows Officer Confronting Armed Suspect
YesterdayUS Man Tells Wacky Story of Russian-Made Mi-17 of 'Secretive Agency' Landing in His Backyard – Video
YesterdayFDA Rejects Pfizer’s Initiative to Offer Booster Jabs After Reports on Vaccine’s Plummeting Efficacy
YesterdayUS Conducts Successful Test of Trident II Missile, Navy Says
YesterdayFrench Foreign Minister Says Paris Had No Prior Discussions on AUKUS, Submarines With US
YesterdayVideo: Hundreds of Illegal Immigrants Stream Across Rio Grande Into US State of Texas
YesterdayPhotos: LA Parents Angered by 'F**k Police', 'F**k Amerikkka' Posters Hung in Classroom
YesterdayLionel Messi’s Contract With Paris Saint-Germain Leaked, Report Says
Yesterday'Cocooning': Biden Team Created a 'Wall' to Guard Him From Unscripted Events, Book Says