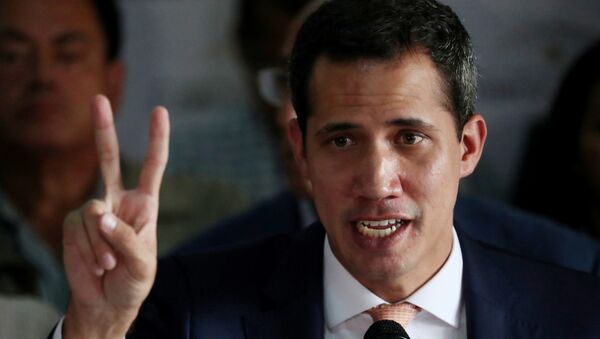 The development comes after a failed coup attempt which took place on 30 April and Guaido's subsequent statement that he would "perhaps" agree to US military intervention if it would help resolve the political crisis in his country.

Self-proclaimed interim president Juan Guaido said on Saturday that he asked his envoy to the United States to meet with Department of Defence officials to "cooperate" on a solution to the Venezuelan political crisis.

"We have instructed our ambassador Carlos Vecchio to meet immediately… with the Southern Command and its admiral to establish a direct relationship," Guaido said as cited by Reuters. "We have said from the beginning that we will use all the resources at our disposal to build pressure."

Earlier, Guaido, while speaking to the Italian La Stampa newspaper, argued that a US military intervention in Venezuela is "one of the possibilities", claiming that after a failed coup attempt the country's opposition would have "more opportunities because more people are joining Operation Liberty." The latter is the campaign Guaido has started earlier this year in a bid to organise protesters and possibly sway the Armed Forces to his cause and eventually oust Maduro from the presidential palace in Caracas.

Revolution? Guaido Calls for Venezuelans to Mobilize for ‘Operation Freedom’
According to Guaido's earlier tweet, Operation Freedom consists of three steps: to create "Freedom and aid" committees "on every street of Venezuela;" to create "labour and sectoral committees" in the public and private sectors and begin preparation of "constitutional forces" within National Armed Forces.

The Operation was started in March amid massive blackouts in Venezuela that officials said were the result of sabotage.

On 9 May, US Southern Command (USSOUTHCOM) combatant commander Admiral Craig Stephen Faller said on Twitter that he is looking "forward to discussing how we can support the future role" of Venezuelan armed forces leaders "who make the right decision" (an apparent hint at supporting Guaido) when invited by Guaido.

When invited by @jguaido & the legitimate gov't of #Venezuela, I look forward to discussing how we can support the future role of those @ArmadaFANB leaders who make the right decision, put the Venezuela people first & restore constitutional order. We stand ready! #EstamosUnidosVE pic.twitter.com/F6ib7mfO47

Following Faller's statement, on 10 May, US ship USCGC James, which belongs to the United States Coast Guard, entered the Venezuelan waters but changed course after communicating with the Venezuelan Navy.

Venezuela's Defence Minister Vladimir Padrino, reacting to the move, said Saturday that "we will not accept" these kinds of activities, according to Reuters.

On 5 May, US Secretary of State Mike Pompeo stated that Donald Trump "has his full range of Article 2 authorities" when asked if the US president believes he could intervene militarily in Venezuela without congressional approval. He highlighted that he believes that "any action" the US takes in Venezuela would be "lawful".

The statement appeared to be a reaffirmation of the previously expressed position that every single tool for what Pompeo described as US efforts "to restore democracy" in Venezuela remained on the table.

"We've made clear our goal is to convince Maduro it is time to leave. We're going to leave every option on the table to achieve that objective", he said.

Later one of the opposition lawmakers Edgar Zambrano was apprehended by intelligence agents and put in pretrial detention at a military prison in Caracas.

Another of Guaido's deputies Americo de Grazia entered the Italian embassy in Caracas on Thursday, while a third Guaido deputy who was also stripped of immunity — Luis Florido — says he has fled to Colombia.

Venezuelan President Nicolas Maduro reportedly signed a decree either reducing in rank or expelling dozens of officers, including high-ranking ones, from the country's armed forces over their involvement in the coup attempt.

Guaido Says He Might Agree to US Military Intervention To Solve Venezuela Crisis
The crisis in Venezuela began when opposition leader Juan Guaido proclaimed himself Venezuela's interim president on 23 January, two weeks after President Nicolas Maduro's inauguration for a second term in May 2018.

The US, Canada, some Latin American and European nations were quick to recognize Guaido as the new legitimate leader of Venezuela and have supported him in his attempts to oust Maduro from power.