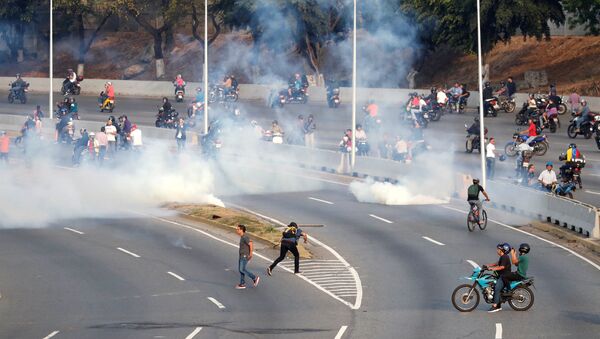 "Around 233 people were arrested, and five people were killed. All these cases are being investigated", Saab told Televisa late on Monday.

Saab said on Saturday that his office had requested 18 arrest warrants to be issued in connection with the coup attempt.

Prof: Intervention in Venezuela Will Be Decided Considering US Internal Politics
The Venezuelan opposition, led by US-backed self-proclaimed interim president Juan Guaido, last Tuesday initiated a new attempt to oust constitutionally elected President Nicolas Maduro, staging a rally in front of the La Carlota military base in Caracas. The coup attempt turned violent and left around 240 people injured, according to UN figures.

Maduro has said that the commanders of all regions and zones of integral defence had reiterated their full loyalty to the country's authorities.

Venezuela has been rocked by unrest since January, when Guaido proclaimed himself the country’s interim president and was recognised by the United States and dozens of other nations.

Venezuela Vows Response if US Takes Military Action
Maduro, recognised by China and Russia among numerous other countries, has accused the United States of seeking to overthrow his government and install Guaido in a bid to get hold of Venezuela's natural resources.

US National Security Adviser John Bolton reiterated that "all options are on the table" with regard to Venezuela, adding, however, that Washington hoped to see a peaceful transfer of power. Moreover, a number of high-ranking US officials have repeatedly stated that all options remain on the table with regard to the Venezuelan crisis, including military action.