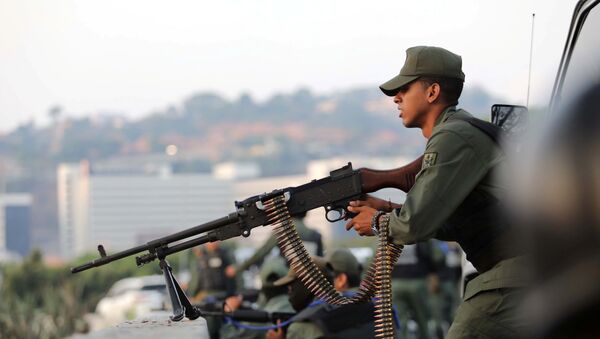 The comments by the Venezuelan foreign minister come shortly after opposition leader Juan Guaido confirmed that he is considering the possibility of international intervention after being asked if he would welcome a US military option to break the months-long political impasse.

Venezuela's Foreign Minister Jorge Arreaza stressed on Monday that Caracas prefers diplomacy to solve the ongoing political crisis, but is ready for any scenario, and will retaliate if the United States chooses to take military action against the government of President Nicolas Maduro.

"We are prepared for any scenario… If [the US] prefers the military path, we are ready to resist — we have an army, police, our people, and we are ready to destroy any army, no matter how powerful it is", he said, adding that Caracas has consistently called on Washington to resolve all issues through dialogue.

The foreign minister continued on by saying that the number of Russian military experts in Venezuela may be increased.

"I would like to remind [you] that a large part of military equipment in Venezuela is Russian… [Russian] President [Vladimir] Putin has offered us the best equipment that exists now and it allowed us to create a strong defence structure. All this requires maintenance. We need to improve it, exchange information. Currently, there is a commission of specialists in Venezuela, of course, it can be expanded", Arreaza told reporters.

Arreaza then claimed that the US Central Intelligence Agency (CIA) and the Venezuelan opposition have devised a plan to oust Maduro in order to get hold of the country's natural resources.

The foreign minister's comments come shortly after Juan Guaido, Venezuela's self-proclaimed interim president, told the BBC that he "will evaluate all options if necessary" when asked if he would welcome US military intervention.

Even though his coup attempt failed last week, Guaido claims that it is "clearly visible that the armed forces no longer support Maduro".

"I think the only one who really hurts himself is Maduro. He has been losing again and again. He is increasingly weak, increasingly alone, and has no international support. On the contrary, we gain acceptance, support and future options”, he said.

Speaking with The Washington Post after the botched coup attempt, Guaido branded the discussions of military options in the US "great news".

“That’s great news to Venezuela because we are evaluating all options. It’s good to know that important allies like the US are also evaluating the option. That gives us the possibility that if we need cooperation, we know we can get it”, Guaido told the news outlet.

Guaido Confirms He’s Considering Asking US Military to Intervene in Venezuela
The developments follow US Secretary of State Mike Pompeo's interview with ABC, in which he claimed that any US action in the Latin American country would be "lawful".

Pompeo went as far as to say that US President Donald Trump "has his full range of Article 2 authorities", when asked if POTUS believed he could intervene militarily in Venezuela without congressional approval.

In the meantime, Russian Foreign Minister Sergei Lavrov has announced that Moscow is planning to create a bloc of countries to counter a potential US intervention.

"I hope that it will receive serious support from the organisation, because we're talking about a very simple issue — one that's hard to distort: the defence of the fundamental norms and principles of international law as they are defined in the UN Charter".

Last week, Guaido released a video in which he encouraged civilians and soldiers to join his so-called Operation Freedom to drive out legitimately elected Maduro, claiming that he had the backing of the armed forces.

Maduro, for his part, reassured the people that he had spoken with the country's military chiefs, who reaffirmed their "complete loyalty to the people, the Constitution and homeland". His comments were supported by Venezuela's defence minister.

Russian and US Positions on Venezuelan Crisis are Incompatible - Lavrov
Guaido later admitted that the opposition had overestimated its backing within the military and said that they had expected Maduro to resign in the face of an increasing number of defectors; but only a handful of soldiers decided to turn their backs on the president.

Venezuela has been mired in an ongoing political crisis since early January, when Guaido was elected the head of the opposition-led National Assembly that all other government branches have been refusing to recognise since 2016.