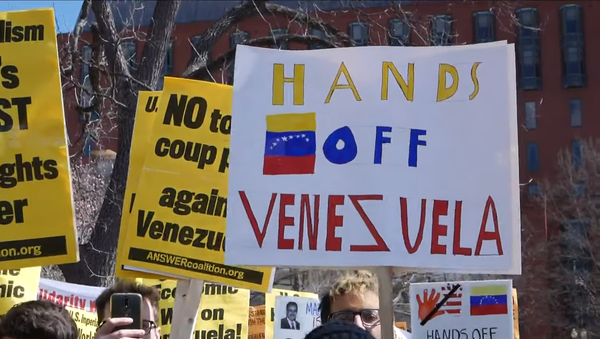 Sputnik: Reportedly, the US special envoy for Venezuela, Elliot Abrams, has said that "senior Venezuelan officials who had previously negotiated the withdrawal of Maduro had turned off their phones." In your view, what does this situation indicate?

Sebastian Tapia: This indicates the utter failure of the attempted coup. That is, if there was any negotiations at all. Only the US government has spoken about the negotiations. There were reports of talks regarding low level officials for years, but no one that could actually deliver Maduro's resignation.

'US Action Against Venezuela is Genocide, Mass Extermination of People' - Journo
Sputnik: Venezuela's military forces have so far remained loyal to the nation's President Nicolas Maduro. Do you believe the latest reports that the US made a secret agreement with the Venezuelan military to arrest Maduro?

Sebastian Tapia: I don't think this secret agreement existed. Or at least, it didn't involve anyone important enough to comply with the terms. There are two possible explanations to the claims about this secret agreement: either it was staged by government officials — Mike Pompeo even named the Venezuelan defence minister — as a trick to force Guaidó attempt the coup sooner and without preparation or it was just Guaidó overplaying his hand. Personally, I believe the second option is true. Guaidó may have told the US everything was ready for a coup as a way to secure their support, but there never was a secret agreement.

Sputnik: If the US succeeds in reaching an agreement with the Venezuelan military, what will this mean for the country's future?

Sebastian Tapia: Well, should the US secure that agreement, then the coup would succeed. That would mean the end of the Bolivarian Revolution, either by being replaced by a neoliberal government that would turn the country into a US oil pump station or by keeping some of the officers in place but betraying all of the Revolution's meaning and content.

Sebastian Tapia: However, that kind of agreement is highly unlikely in this conditions. The Venezuelan army has shown that it still has high morale and is still loyal to President Maduro. The amount of defections has been pretty low, unlike to what Guaidó was expecting when he called the military to switch sides.

Brazil's VP Breaks With Pres. Bolsonaro, Says Venezuela Coup Attempt Premature
Sebastian Tapia: Well, the military intervention in Venezuela will be decided considering US internal politics. It doesn't depend on the situation in Venezuela, which will be heating up by the opposition's rallies and mobilization. South American neighbouring countries, like Brazil and Colombia, are not ready for an intervention. They will not sacrifice their own armies if there are not substantial defections in the Venezuelan army. So it's all up to the US internal politics. Trump is only supported by the media when he shows himself as a militarily strong president, for example when dropping missiles on Syria. If the "Russiagate" keeps on threatening his reelection, even after the release of the Muller report, and he cannot get any achievement in foreign policy, such as a total unilateral denuclearization of North Korea or a retreat of China from the South China Sea, then a military intervention in Venezuela could be possible. After all, the US considers it much easier than invading Iran.

Sputnik: According to the reports, the Trump administration wants to find a way to financially support Venezuela's opposition leader, self-proclaimed 'interim president' Juan Guaido, with an "influx of cash". In your opinion, why would the US be willing to budget federal money for supporting the opposition in Venezuela?

Sebastian Tapia: Venezuelan opposition has been funded through NGOs for a long time. And Guaidó's Latin America tour through all of the us allies governments after the concert in Cucuta was paid by someone. So my guess is that Guaidó is already receiving US money. However, creating a special fund would be a way to show bipartisan support to the regime change policy in Venezuela and a way to show Trump administration is doing something while evaluating how the situation evolves and if a military intervention is required. If part of the federal budget cannot be allocated for such purposes, I'm sure Elliot Abrams can think of some ways to raise funds like he did for the Contras in Nicaragua in the 80's.

Sputnik: Follow up — How likely is a successful coup d'etat, if the US money isn't provided?

Sebastian Tapia: So far, the coup seems to be a failure. However, the US money could be used to "reward" those military officers that switch sides. In that case its chances can improve, but time is running up and the Venezuelan government seems to keep the people's support.