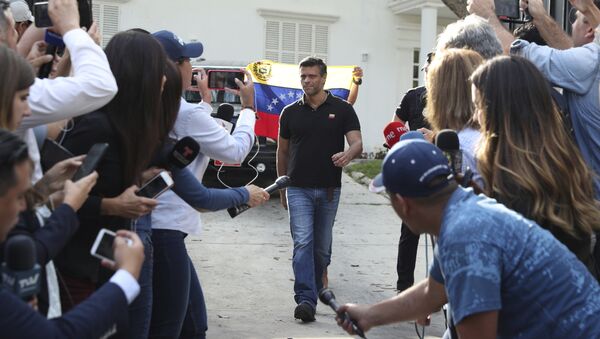 © AP Photo / Martin Mejia
Subscribe
WASHINGTON (Sputnik) - Desperate Venezuelan opposition leader Juan Guaido is calling on the United States to intervene militarily in Venezuela because he has lost credibility among his own supporters while the Trump administration stands ready to exploit the country’s resources, analysts told Sputnik.

On 30 April, Guaido proclaimed and media reported worldwide that a military insurrection was underway to topple President Nicolas Maduro while Trump administration officials said senior Venezuelan government leaders were prepared to defect. By the end of the day, however, it became apparent none of the reports were true. The following day hundreds of thousands of Venezuelans marched in the streets to support Maduro.

"Three times this year — on 23 January, 23 February and more recently on 30 April — Guaido assured his followers that Maduro would be ousted in a matter of days. As a result of these three defeats, Guaido has lost credibility among the opposition’s rank and file. His support for US military intervention has to be seen in this context", Ellner said.

"That Guaido has indicated receptivity to the idea shouldn’t be surprising. He belongs to the radical wing of the opposition that is grouped in his Voluntad Popular party and other parties that oppose dialogue with the government", he said.

These "radicals" include Antonio Ledezma who uses the euphemism "humanitarian intervention" to refer to military intervention, Ellner observed. The group of radicals also includes Organization of American States (OAS) Secretary General Luis Almagro who claims that US military intervention in Venezuela would not violate international law, he added.

"Another radical is Diego Arria who asserts that a U.S. military intervention would be welcomed by the Venezuelan people. This position has no basis in fact", Ellner explained.

"These leaders — Ledezma, Arria, and Voluntad Popular — do not enjoy major electoral backing. By far, the two major parties of the opposition — Primero Justicia and Accion Democratica – do not belong to the radical fringe", Ellner emphasized.

US officials for months have repeatedly said they are considering military options to oust Maduro. On Tuesday, Maduro told the RT broadcaster that the United States wants to intervene to take control of the country’s oil resources and other material wealth.

The Venezuelan president also called on the international community to condemn US plans to intervene and "to stop the madness of Donald Trump".

Why Trump Wants War With Venezuela Not Iran
Venezuela sits on the world’s largest proven oil reserves, which Guaido has promised to let US corporations exploit by privatizing the energy industry.

Former president Hugo Chavez, who led Venezuela from 1999-2013, nationalized the country’s oil industry, which forced out major US and international oil producers such as Exxon Mobil, Chevron and BP.

Earlier this year, White House National Security Adviser John Bolton told FOX News that "it will make a big difference to the United States economically if we could have American oil companies invest in and produce the oil capabilities in Venezuela".

University of Pittsburgh Professor of International Affairs Michael Brenner told Sputnik that the only debate among US policymakers with respect to Venezuela is whether the United States should continue backing a puppet front man such as Guaido or whether to launch a full blown military invasion.

"The US is reverting to 19th century style imperialism by coercion… I see the answer as a blend of neo-liberalism global rule by plutocratic elites and the impetus/shock troops being neo-Fascist movements which the US is modeling", Brenner said.

000000
Popular comments
. Just yesterday the US of Na acknowledged the fact that there is no mass support for Guaido, and that the Venezuelan military stands firmly behind Maduro. So, when there is no mass anger against Maduro, how can the ugly US of Na even rationalise its intention for military interventions? The facts remain that- *Venezuela is a sovereign nation *Its President was elected through democratic processes *Only through UN's approval military interventions in a member nation can be done So, what makes the US of Na even dream that it has the right to intervene militarily in Venezuela? Holy Cow!!!