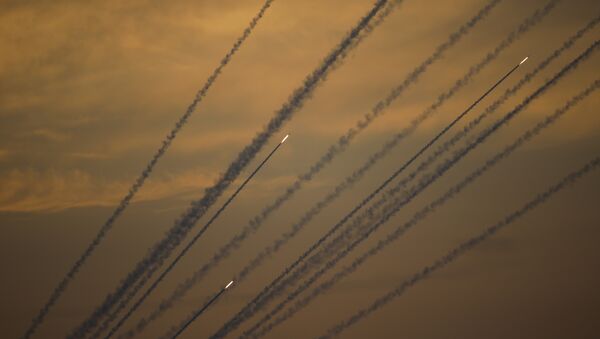 Tensions between Israel and the Gaza Strip further escalated on May 4, when hundreds of rockets were fired from the enclave on Israel, prompting the IDF to retaliate and strike terror targets in the area. The two-day-long escalation ended as the sides reportedly reached a ceasefire agreement with Egypt's mediation.

Sputnik has discussed the recent escalation in Gaza and its consequences with Eran Etzion, an Israeli diplomat and strategist who was head of policy planning at Israel's Ministry of Foreign Affairs and deputy head of the National Security Council in the Prime Minister's Office.

Sputnik: The IDF has informed that 430 rockets have been fired from Gaza at Israeli civilians in less than 24 hours; what could be the consequences?

Eran Etzion: We are seeing consequences already; there’re casualties on both sides. There is a dynamic of escalation; and has actually been the case for a number of times in recent years, pretty familiar, it’s a very pervasive sense of déjà vu for everybody involved, including the public on both sides. The question is whether it will end differently compared to previous rounds. And the answer is probably no, it will end pretty much the same.

READ MORE: US to Review Ties With States Based on Their Attitude Toward Israel

Sputnik: What’s your prognosis for the situation?

US President Trump Says '100 Percent' Supports Israeli Actions in Gaza Strip
Eran Etzion: The prognosis is that while we are still under this old/new prime minister or government on the Israeli side, and obviously the same political situation on the Palestinian side, in Gaza and in the West Bank, with Hamas controlling Gaza and the PA controlling the West Bank, and the two parties in complete disengagement from one another, I don’t think that the conditions are right for any kind of drastic or strategic change in the outcome of this round compared to others. Theoretically or potentially we can discuss other possibilities, for example, entering into negotiations — serious negotiations like we had in previous years, more than 10 years ago; I don’t think it’s really in the cards. The next question, obviously, is what about the so-called Trump plan? Will it maybe make a difference?

I think, certainly when it comes to Gaza, probably not; when it comes to the West Bank, possibly yes, but not in the direction of further agreements and negotiations, but rather further unilateral steps from the Israeli side, namely annexation. The most probable scenario as a result of the introduction of the plan, and I think this is pretty much the conventional wisdom already; it doesn’t necessarily mean that this is what will happen, but I think in this case it’s probably the most probable outcome, which is that the plan will be introduced, the Palestinian side will not accept it, the two potential parties on the Palestinian side, both the PA and Hamas, will reject it, it’s from their own particular consideration; the Israeli side will also not accept it, but not reject it completely, because it will be closer to what Israel wants compared to the Palestinian demands, and because there is obviously a much greater level of coordination between Israel and the Trump administration.

The next step is going to be that Israel will see itself as free, or even entitled or encouraged to continue with unilateral steps, including some limited partial annexation of certain areas of the territories, namely those where there’re major settlement blocs and so on and so forth — which in turn will probably bring about further escalation. You see the pattern; it doesn’t bode well for those who seek stability, quiet agreement, negotiations, and so on.

Sputnik: For example, if Israel annexes the West Bank territories, as Prime Minister Netanyahu promised before the elections, what might be the reaction of Israel’s closest allies and the Arab world?

Eran Etzion: It’s an interesting question; there’s a lot of speculation already about this. Again, if we look at the more probably scenario, as I described before, there is perhaps tacit support, or even open support of the Trump administration in whatever Israel chooses to do, some form of limited gradual annexation. Obviously, the Europeans will be against it, but they are by and large irrelevant. I’m not sure about China and Russia; I am sure that they will be against it, but will they take any meaningful steps, I doubt it very much. If it’s only protestation, it wouldn’t leave a mark on reality on the ground or even on the overall strategic reality. And yes, there is a question mark about the Arab countries, more specifically Egypt, Jordan, and Saudi Arabia and perhaps also some of the Gulf countries, UAE and so on. It looks as if they will continue their overall strategy vis-à-vis Israel, which is on the face of it condemnation, certainly when it comes to Israeli unilateral steps, either militarily or politically, and certainly annexation, they will not approve it, they will be against it; but they will continue with the, if you will, underground normalisation which is already ongoing in terms of all sorts of intelligence sharing, defence relations, political cooperation, economic and commercial cooperation, and so on.

Are we to expect a sharp reaction from these Arab countries, for example, Egypt and Jordan cutting off diplomatic relations with Israel, even temporarily, or taking any other more meaningful steps as retaliation for Israeli annexation — I wouldn’t say it’s not in the cards, it could happen, and it does depend on multiple factors which are difficult to predict right now, for example, what kind of real reaction we will see from the Palestinian side, what the plan will entail, whether these Arab countries can be for the plan or they will be against the plan and so on and so forth. But again, if you want the bottom line, I obviously think that we will see condemnation from the Arab countries, but I doubt that we will see any serious retaliatory steps from any of them.

Sputnik: If we speak a little bit about Hamas and Islamic Jihad, what could their further steps be and what’s the attitude towards these groups in Palestinian society?

So, it’s not a coincidence that the mood overall, both in Gaza and in the West Bank, right now, is pretty grim. This Ramadan, some are already calling it the black Ramadan because the mood is really grim and people see no hope; there’re some new statistics coming out of Gaza in terms of the number of people that are actually fleeing Gaza and also, a little bit like they’re doing from Libya and other Arab countries, trying desperately to cross into Europe, this is a relatively new phenomenon that we are seeing in Gaza as well. So, there is no political faction right now that the Palestinian people can look up to and say: “these guys, if only they would be in power, our situation would be better”.

Sputnik: Do you think this escalation can somehow improve Hamas’ position in the Palestinian inner power struggle? Can we say that this escalation’s timing is not accidental?

Islamic Jihad Releases Video Threatening to Target Israeli Nuclear Facility
Eran Etzion: You’re absolutely right that it’s not accidental. It has to do with Hamas’ assessments, some of which I’ve just outlined, of the mood of the population and the economic and humanitarian situation in Gaza, which is pretty dire. They were building on certain steps that, among others, Israel, Qatar, and Egypt were supposed to take as a result of understandings that were reached a few months ago that called for the entrance of much more building material and the extension of the maritime boundaries of Gaza to allow for fishermen to do their job more freely and bring in more fishery and so on.

According to Hamas, Jihad and others, these understandings were not fulfilled in a satisfactory way by Israel, Qatar, and possibly Egypt as well. This is both the official reason and probably the real reason why Hamas opened fire this time. We always see this dynamic of escalation where one party starts and then the other party reacts, and then the reaction triggers further reaction, and so on and so forth. At some point Islamic Jihad joined in for its own reasons, which may very well be tied to the Iranian interests; and we are once again in this well-known dynamic. So, to answer your question, to what extent this contributes to Hamas’ political situation internally, I don’t think frankly that it does; Hamas is not in good standing vis-à-vis the population, there were actually some early signs of revolt in Gaza just a few months ago, Hamas opened live fire on civilian protesters in Gaza and killed a number of them. So, they are, I don’t want to say desperate, but they are in a grave situation, and this is the main reason why we are now witnessing this violent exchange.