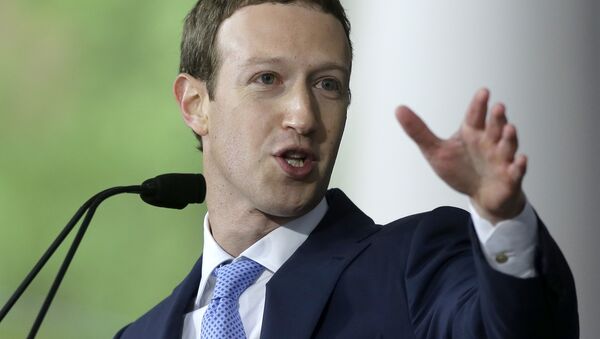 Facebook has recently banned a number of prominent right-wing figures as "dangerous individuals", with the recent restrictions applying on Instagram as well. Speaking to Sputnik, a cyber security analyst and former US congressional candidate shed light on what appears to be political bias on the part of the Silicon Valley giants.

On 3 May, US President Donald Trump directed criticism at tech giants in Silicon Valley for banning right-wing users and media pundits.

I am continuing to monitor the censorship of AMERICAN CITIZENS on social media platforms. This is the United States of America — and we have what’s known as FREEDOM OF SPEECH! We are monitoring and watching, closely!!

​He warned that he would "monitor the censorship of Americans on social media platforms".

The wonderful Diamond and Silk have been treated so horribly by Facebook. They work so hard and what has been done to them is very sad — and we’re looking into. It’s getting worse and worse for Conservatives on social media!

​Speaking to Sputnik, Elbert Lee Guillory, a former member of the Louisiana State Senate and congressional candidate, agreed that Facebook founder Mark Zuckerberg "and his minions" had a long record of trying "to limit and shape public discourse by preventing anyone who's right-of-centre from having full access".

He referred to African-American conservative duo Diamond and Silk, pseudonyms for Lynnette Hardaway and Rochelle Richardson, stressing that although they "hardly could be considered dangerous", both were banned by Facebook.

"They are anti-left and that's all; to say that Diamond and Silk are dangerous and, therefore they should be removed from the public square, from public discourse, is just nutty", Guillory opined.

Can’t Please ‘Em All: Trump Bolsters Conservative Pundits After Facebook Ban
What is more disturbing, according to the politician, is that the Silicon Valley giant "just moved from limiting to outright banning". "That step is a very dangerous step for them to take", he stressed.

For his part, Petri Krohn, a Finnish cyber security analyst, drew attention to US social media's crackdown against Alex Jones, an American conservative radio show host: "Facebook's action yesterday was not about depriving Alex Jones [of] his constitutional right to free speech", he said, adding that the right-wing media pundit had been "blocked from all major social media platforms in a coordinated ban last year".

"This new ban is on content and ideas that originate from Alex Jones and his Infowars site. This is like a medieval 'imperial ban' that declares Alex Jones a heretic and his ideas heresy", he said. "Much like Martin Luther was banned by the Pope and the Holy Roman Emperor. Anyone who shares or is sympathetic to his ideas now faces a potential ban on Facebook".

While hi-tech media have platforms demonstrated agility in nothing short of censoring right-wing users, it took quite a while for them to remove the Christchurch shooter's manifesto and a 17-minute video of people being massacred in two mosques, which he managed to livestream online. The Christchurch shooting spree took place on 15 March 2019.

In a separate tweet on 4 May, the US president lambasted Facebook and Twitter for allowing US MSM to spread "fake news" about the alleged Trump-Russia collusion story which was proven wrong by Special Counsel Robert Mueller's report.

When will the Radical Left Wing Media apologize to me for knowingly getting the Russia Collusion Delusion story so wrong? The real story is about to happen! Why is @nytimes, @washingtonpost, @CNN, @MSNBC allowed to be on Twitter & Facebook. Much of what they do is FAKE NEWS!

Twitter Wipes Out 5,000 Accounts With Criticism of Mueller Report
"When will the Radical Left Wing Media apologize to me for knowingly getting the Russia Collusion Delusion story so wrong? The real story is about to happen! Why is The New York Times, The Washington Post, CNN, MSNBC allowed to be on Twitter & Facebook. Much of what they do is fake news!" he wrote.

This is not the first time that Silicon Valley giants have been accused of political bias. In January 2018, right-wing journalist group Project Veritas exposed Twitter's controversial techniques, including "shadow-banning" and "down-ranking" conservatives in a series of hidden-camera interviews.

On 9 April 2019, The Daily Caller reported that another hi-tech leader, Google, "does manipulate its search results manually, contrary to the company's official denials". Citing exclusively obtained documents, the media outlet revealed that Google maintained a blacklist preventing certain websites from appearing in search results. The blacklist included several conservative websites, such as Gateway Pundit, Conservative Tribune, American Spectator, and others.