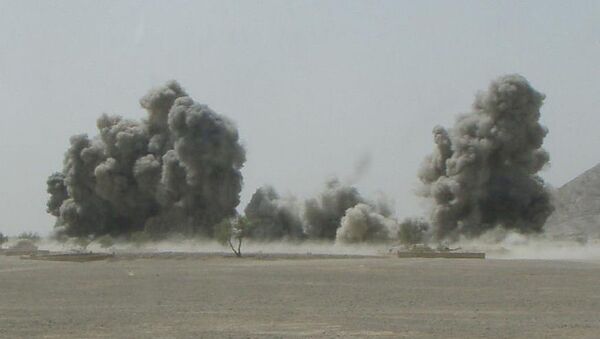 KABUL (Sputnik) - At least 30 Afghan civilians have been killed in airstrikes carried out by US troops in the country's west in what has become the deadliest bombing in the last three months, Governor of the Bakwah district in the Farah province Abdul Ghafur Mujahed told Sputnik on Monday.

He specified that the airstrikes had targeted factories that were producing illegal drugs, which he described as one of the main sources of income for the radical Taliban movement.

However, local residents claimed that the airstrikes aimed at civilian houses with no drug manufacturers inside.

"The US targeted these houses on Sunday; only civilians, including women and children, are the victims… they were only poor people, Taliban was not here," a villager told Sputnik.

Afghan Forces Kill Head in Charge of Daesh Activities in Central Asia - Reports
Other locals also said that the airstrikes targeted a large house with three families recently displaced to the area living inside.

According to Mujahed, six members of one family, including women and children, were among those killed in the airstrikes.

In its latest report published in April, the United Nations said that the airstrikes by pro-government forces had killed more civilians than Taliban in the first quarter of 2019.

Afghanistan is suffering from an unstable political, social and security situation due to the activity of the Taliban and Islamic State terrorist group (banned in Russia). The Afghan National Defense and Security Forces are currently conducting joint offensive operations to combat terrorism across the country with support from the international coalition.