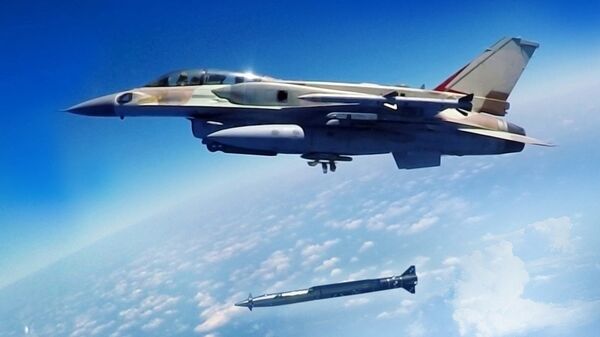 Just a week ago, an independent defence analyst reported that Israeli Air Force F-16s may have used the newly-developed air defence-evading "Rampage" air-to-surface missiles during an alleged airstrike in Syria.

In a Friday article, Rötzer cited Israeli media as reporting that the country's Air Force deployed the air-to-surface supersonic rocket for the first time a week ago, having allegedly destroyed a large hangar and three buildings in Syria's Hama Province.

Israeli Firm Dumps Satellite Snaps of Alleged 'Iranian' Facility Struck in Syria
The journalist added that Israeli satellite intelligence company ImageSat International had released satellite images of the facilities, which it says may be "Iran-related missile manufacturing hangars" in Syria.

Rötzer continued by saying that the reported Israeli operation has been described in the media as a reaction to Syria's Russia-upgraded air defence: in October, Moscow delivered its S-300 batteries to Damascus to enhance the security of Russian service members stationed in Syria.

According to him, the "Rampage" missiles may have capabilities that can outsmart missile defence systems, including S-300s, and the reported airstrikes in Hama are likely to be seen as "an advertisement for the new armaments products, moreover, they should serve as a deterrent, if they actually apply".

The new missile was introduced last year by Israel Military Industries Systems (IMI Systems) and Israel Aerospace Industries, with developers claiming that the rocket "allows us to strike under conditions we've never had before". The weapon can be deployed aboard IAF F-15s, F-16s and F-35s, and can travel over 140 km at supersonic speeds, guided by an onboard GPS system.

Syrian S-300 Systems Were 'Inactive' During Israeli Missile Attack – Iranian MP
Rötzer penned that it was emphasised that the all-weather missiles are specially tailored to targets that are protected by air defence systems, but they can also penetrate sheltered buildings such as bunkers.

Israeli media likewise suggest that the deployment of "Rampage" should also test out whether the Russian S-300 anti-aircraft systems can be tricked into being stationed near the attacked base and detect, track and shoot down aircraft or missiles within 300 km, which the Israeli military believes poses a threat to Israeli fighter planes and airstrikes.

Earlier this week, Yoel Strick, an outgoing IDF general, told YNet News that if Syria used Russian S-300s against Israeli aircraft, "it will be seen as a legitimate move on our part".

"I see that happening though I hope we don’t get to that. But if our freedom of movement is threatened we will remove the threat. We know how to do that”, he said.

Israeli aircraft reportedly carried out airstrikes against an alleged "Iran-linked" "missile factory" in the Syrian countryside outside the city of Hama last Saturday, with multiple buildings destroyed and at least three soldiers injured. Syria's air defences reported the downing of several projectiles that were launched from Lebanese airspace to try to thwart an effective air defence.

The Israeli Air Force has conducted hundreds of strikes across Syria over the past few years, while accusing Iran of using the war-ravaged country in a bid to "entrench" itself in the region and establish a permanent military presence there.

Tehran has flatly denied these claims, saying it has only been providing military advisers to Syria at Damascus' request to help the country fight against terrorism.

The Russian military delivered the systems to Damascus in response to an incident in which Syrian air defences accidentally shot down a Russian Il-20 military aircraft with 15 service members on board in Latakia while attempting to repel an Israeli airstrike.

In the aftermath of the incident, Moscow accused the IDF of deliberately using the Russian aircraft as a shield during their attack on targets in Syria. Tel Aviv rejected the accusations, claiming it had warned Moscow about the upcoming air raid in the area in a timely fashion.