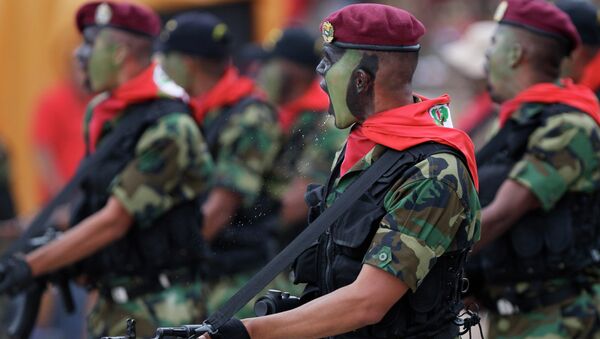 Caracas is accusing the US, Colombia and Brazil of conspiring to launch a military invasion in Venezuela. Speaking to Sputnik, Paulo Velasco, research fellow at the Brazilian Centre for International Relations (CEBRI) weighed up the probability of Brasilia's participation in such an invasion.

In accordance with Brazil's Constitution, the country's president, Jair Messias Bolsonaro, has the power to declare war, says Paulo Velasco, political scientist, research fellow at the Brazilian Centre for International Relations (CEBRI) and associate professor of international politics at the Rio de Janeiro State University (UERJ), commenting on the potential use of military force in Venezuela.

On 15 April, Venezuelan Vice President Delcy Rodriguez accused US, Brazilian and Colombian officials of considering plans to launch a military intervention in the country.

"The international community and its organs of multilateral legality must know that a criminal plan is underway to militarily attack Venezuela!" she tweeted Monday.

US, Colombian and Brazilian officials who plot to ignore the will of the people of Venezuela through military violence incur in crimes against humanity and are internationally responsible! The same fate have those "Venezuelans" who join this crime!

Earlier, on 8 April, Bolsonaro told Jovem Pan Radio that he had been working with the US government to sow discord within the Venezuelan army, adding that in the event of a military invasion in Venezuela, he would consult with Brazil's National Defence Council and Congress regarding what steps he should take.

According to Velasco, Bolsonaro's statement sent a strong signal to Caracas.

The academic stressed that Brazil's current position contradicted the political course the country had pursued over the past decades. According to him, Brazil has always been a stalwart advocate of stability in the Southern Hemisphere and acted as a mediator during conflicts between the nations of the region.

However, despite the president's sabre-rattling, his country's military, most notably Vice President Hamilton Mourao, a retired Brazilian Army general, do not always share Bolsonaro's strategic vision.

Following his meeting with US Vice President Pence on 8 April, Mourao told reporters that the crisis could be resolved through peaceful means and ruled out a military intervention.

Previously, on 13 March, The Financial Times quoted Mourao as saying that Brasilia sought a "negotiated exit" for Venezuelan President Nicolas Maduro. The media outlet called the vice president "one of the most powerful figures in Jair Bolsonaro's cabinet".

For his part, Brazilian Defence Minister General Fernando Azevedo emphasised that "Brazil is in favour of diplomacy" in his interview with Bloomberg on 17 March.

"When Mourao speaks, he speaks on behalf of the military, who do not want to interfere in Venezuela," Velasco suggested. "They will not gain anything from this. Along with the risk of specific material losses and casualties, the military will not receive any dividends from an operation in Venezuela."

Stalled Coup: US' Allies May Soon Regret They Rushed to Embrace Guaido – Journo
The professor presumed that Bolsonaro would try to evade a political confrontation with Brazilian generals.  In other words, a declaration of war on Venezuela is unlikely, even though the "ideological wing" in the president's cabinet is calling for a military intervention, according to the academic.

"Regardless of his rhetoric, it has to do more with the art of acting, and the need to demonstrate strength, rather than with the actual desire to act in defiance of the vice-president and the Armed Forces, who have already said through various representatives that they are not interested in participating in this type of adventure," Velasco underscored.

Delcy Rodriguez's recent concerns could have been prompted by a report published by The Grayzone, an investigative website, about an off-the-record Centre for Strategic and International Studies (CSIS) meeting between high-ranking officials from the US, Colombia and Brazil that presumably took place on 10 April.

The site leaked the supposed list of participants of the secret summit, which was focused on "military options in Venezuela", according to Sarah Baumunk, a research associate at CSIS's Americas Programme, who was present at the meeting.

"The CSIS meeting on 'Assessing the Use of Military Force in Venezuela' suggests that the Trump administration is exploring military options more seriously than before, possibly out of frustration with the fact that every other weapon in its arsenal has failed to bring down Maduro," The Grayzone editor Max Blumenthal wrote. Blumenthal is an award-winning journalist and the author of several books.

For its part, CNN reported on 15 April that the Pentagon was mulling over new military options against Caracas. Citing an unnamed defence official familiar with the matter, the media outlet noted that the effort is aimed "at deterring Russian, Cuban and Chinese influence inside the regime of President Nicolas Maduro."

Venezuela was dragged into a political crisis on 23 January 2019 when the US rushed to recognise the self-declared interim president of the country Juan Guaido. Washington's global allies and partners followed suit. Russia, China, Turkey and many other countries continue to support Venezuelan President Nicolas Maduro.