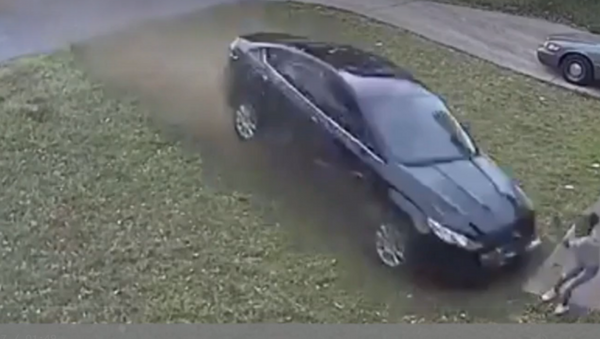 Nine-year-old LaDerihanna Holmes is in critical condition after a car crashed into her Friday while she was playing in her front yard.

According to reports, Holmes suffered a heart valve leak, a skull fracture and a broken pelvic bone, in addition to other injuries, after a Ford Fusion plowed through the house's front yard in the Redan area of DeKalb County, Georgia, on Friday evening around 7 p.m.

God is so great. There is no explanation on how my client is alive. I sat with her and can’t believe my eyes and though her road to health will be long, she’s alive. #miracle Please turn yourself in to the teens who ran. https://www.gofundme.com/laderihanna-holmes

Footage from the family's home security camera shows Holmes playing with a friend in the front yard moments before the sedan plows through a stop sign and runs her over, crashing into the house. Her friend, whose identity is unknown, is seeing dodging to the side, narrowly missing being struck as well. The footage also shows a man, presumably the driver, exiting the car and fleeing as members of Holmes' family rush toward the car lodged in their home.

According to the family, there were two people the car; one in the driver's seat and one in the passenger's seat, although this is not apparent from the surveillance video.

One of the men in the car rummaged through it after the accident before taking off, Holmes' family claims. They were preoccupied at the time with getting Holmes to the hospital as soon as possible.

"I was acting out of pure adrenaline and emotion when I saw my baby girl laying on that ground," Charlotte Bolton, Holmes' mother, recently told NBC News. "She wasn't moving. Her eyes was open and agape. Her eyes were fixed, and I thought she was gone."

Got my lil miracle baby to smile 😬 She did so great today in ICU and during her mental testing! 🙌🏾🙌🏾 #LaDerihannaHolmes #miracleshappen

"You will be caught. The video is everywhere," Bolton urged at a Monday press conference, addressing her statement to the individuals in the car. "Think about a precious little girl… Do what's right," she added. Holmes' friend, who was also rushed to a local hospital, was not seriously injured, according to Burton.

According to the the DeKalb County Police Department, the owner of the vehicle that crashed into Holmes was at home at the time of the incident. She told police that her boyfriend, who is in his 30s, was driving her car Friday. However, according to Holmes' family's attorney, L. Chris Stewart, the two people in the car appeared to be teenagers. Police have yet to identity any suspects in the hit and run.

"God is so great. There is no explanation on how my client is alive. I sat with her and can't believe my eyes and though her road to health will be long, she's alive. #miracle," Stewart wrote on his instagram page. He did not immediately respond to Sputnik's request for comment.

A GoFundMe has been set up by Holmes' family to help cover the cost of her medical treatment. So far, almost $3,000 of the $20,000 donation goal has been reached.