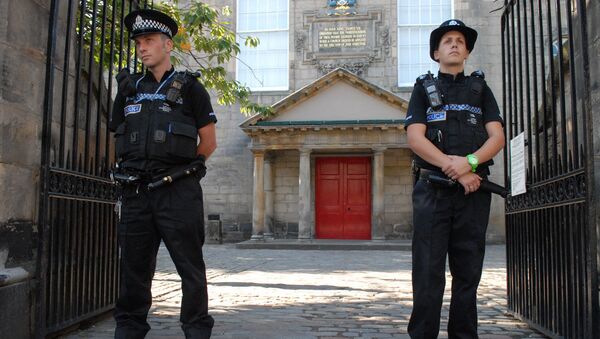 © AP Photo / Scott Campbell
Subscribe
International
India
Africa
The attack took place earlier this year in Scotland and left one of the victims, a 14-year-old girl, with a broken neck.

Gerald Gavan has admitted deliberately running over youths and a man in Castlemilk District, Scotland in March. The youngsters were “caught up” in Gavan’s dispute with Billy McGregor, another local, over the murder of Jamie Lee in 2017, though the exact nature of their feud is unclear.

He pleaded guilty to seven counts of attempted murder as Glasgow’s High Court on Tuesday and will be sentenced on September 25.

Viral
Shocking! Cyclist Launches Road Rage Attack With 'Zombie Knife' in London
Outlining the attack, authorities said Gavan mounted the pavement in a Vauxhall Astra hatchback and mowed down a group of young teenagers, before ramming his vehicle into McGregor.

As a result, a 14-year-old girl suffered a broken neck and required immediate medical attention, receiving treatment in a six-hour operation and later having a titanium plate attached to support her spine.

“Thankfully she survived, however the consequences could have been much, much worse,” Detective Inspector Peter Sharp said, stressing the seriousness of the injuries the girl sustained.

The others suffered minor injuries but were traumatized by the incident, according to police.

Detective Inspector Sharp also insisted that hit-and-run attacks won’t be tolerated, saying, “For anyone to play out retribution or aggression in a public area using a vehicle as a weapon will simply not be tolerated. For innocent members of the public to be caught up in this horrendous incident is unacceptable.”