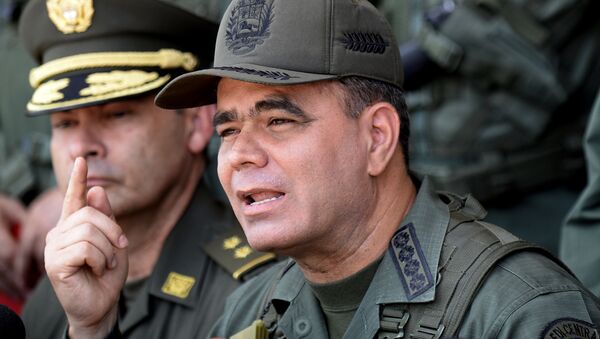 Venezuelan Defense Minister Vladimir Padrino said on Friday that US National Security Adviser John Bolton has been sending him messages asking him to do the "right thing", Reuters reported.

Padrino said last week that the Venezuelan army does not recognize National Assembly head Juan Guaido as the country's president. "We, the soldiers of the Motherland, do not accept the president imposed in the shadow of dark interests, a self-proclaimed outlaw", the minister said.

On Sunday, media reported that a Russian military delegation had arrived in Caracas and, according to a Sputnik source, was planning to discuss defense industry issues with Venezuelan counterparts. After the arrival of Russian Defense Ministry officials in Caracas, media released photographs depicting Russian S-300 air defense missile systems deployed in the country and claimed that Venezuela had just installed the complexes on its territory.

US Ally Slams Alleged Russian Military Deployment in Venezuela
On Monday, a military and diplomatic source told Sputnik that Moscow and Caracas had not recently signed any contracts for the supply of S-300 systems to Venezuela, adding that existing systems had been deployed to the country in 2013.

Venezuela is currently in the midst of a political crisis. On 5 January, Guaido was elected the head of the opposition-controlled National Assembly, which all other government branches have refused to recognize since 2016.

On 23 January, two days after the Venezuelan Supreme Court annulled his election, Guaido declared himself the country's interim president. Venezuelan President Nicolas Maduro, who was sworn in for his second presidential term on 10 January after winning the country's May election, which part of the opposition boycotted, called Guaido's move an attempt to stage a coup orchestrated by Washington.

The United States immediately recognized Guaido, after which some 50 other countries, including Colombia, followed suit. Russia, China, Cuba, Bolivia and a number of other states have, in the meantime, voiced their support for the legitimate government of the constitutionally elected Maduro. Mexico and Uruguay have refused to recognize Guaido, declaring themselves neutral and promoting crisis settlement via dialogue.