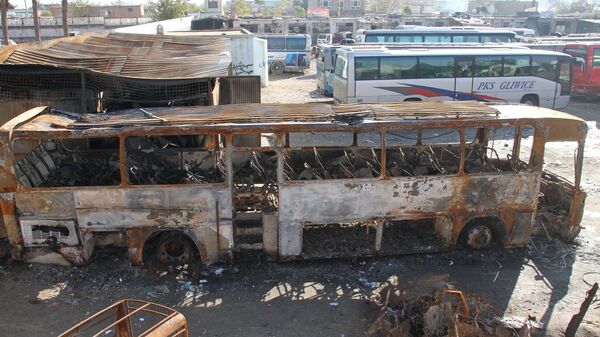 © Photo : J.Kargyar
Subscribe
International
India
Africa
A US airstrike has killed 10 children from the same family in the northern Afghan city of Kunduz, where, four years ago, another US airstrike destroyed a hospital, killing dozens of civilians.

An airstrike in the Telawka neighborhood of Kunduz on Saturday killed 13 people: three adult civilians and 10 children from the same family. US-Afghan forces had been locked in a 30-hour battle with the Taliban in the northern Afghan province, which sits near the border with Tajikistan.

US to Withdraw All Troops from Afghanistan in Five Years – Report

Sgt. Debra Richardson, a spokesperson for the NATO-led Resolute Support mission in Afghanistan, confirmed the following day that US forces had carried out the strike, blaming the civilian deaths on the Taliban's purposeful proximity to noncombatants, Reuters noted.

On Friday, two US service members were also killed in Kunduz, a city of a quarter-million inhabitants, Sputnik reported, although Taliban spokesperson Zabihullah Mujahid claimed it had killed three US service members as well as nine Afghan commandos.

It was in Kunduz in October 2015 that the US infamously attacked a civilian hospital. The Kunduz Medical Center, operated by Doctors Without Borders, came under attack by a US Air Force AC-130 gunship, a modified transport aircraft equipped with heavy rotary cannons and an artillery gun. The gunship pounded the hospital with dozens of artillery shells, killing "at least 42 people," Sputnik reported, including 24 patients, 14 staff members (four of whom were doctors) and four relatives people visiting patients at the time.

While the Pentagon admitted to "errors" leading up to the "unintentional" strike, its conclusion in a 2016 investigation found that while "certain personnel failed to comply with the rules of engagement and the law of armed conflict… the investigation did not conclude that these failures amounted to a war crime." In fact, for days after the attack, many US media sources, such as a New York Times and CNN, deliberately obscured who was responsible.

Brian Terrell, co-coordinator of Voices for Creative Nonviolence, told Sputnik Monday that, in fact, the US bears responsibility for the uptick in civilian deaths following US President Donald Trump's Afghan surge, announced in late 2017. "Traditionally there was a fighting season and a season that was more or less safe… and the US went along with that. But part of Trump's announcement in 2017 was that the fighting was going to continue through the winter…. That's one reason why there's been such a spike in deaths. And… of course, the Taliban is not innocent in this, at all. But they weren't killing people in the winter time before. But when Donald Trump said the gloves are off, those kinds of words and actions have consequences."

Whether the Taliban is responsible for many or most of these civilian deaths, they are acting in response to the US, Terrell said. "In this danse macabre, the US has been the lead. So it's not that others aren't responsible, but the increase in lethal activity by the Taliban is predictable, at least predictable if not inevitable and if not the intentional result of the surge by the US. They know it's going to happen."

The US also bears responsibility for deaths caused by a lack of health infrastructure — like hospitals. While the US has already shelled out "more real dollars than were spent for the whole Marshall Plan to rebuild Central Europe after World War II," Terrell noted, just before the 2015 attack, the Special Inspector General for Afghanistan Reconstruction (SIGAR) had issued a report saying that, for all those billions, "most of the hospitals as well as the schools that USAID claims to have made with taxpayer money don't exist. They're ghost hospitals that are receiving funds that aren't there."

The UN noted last month that child casualties from airstrikes have risen every year since 2014, and that last year saw a record number of Afghan civilians killed in both airstrikes and suicide bombings.

Terrell also pointed out that, according to UNICEF data, Afghanistan has some of the highest infant and maternal mortality rates on the planet, "which of course is entirely preventable." Afghanistan has 52 infant deaths per 1,000 live births and nearly 4 maternal deaths per 1,000 births. Further, 77,300 Afghan children under the age of five die each year. Terrell noted that 12 percent of those deaths occur due to diarrhea brought on by inadequately treated drinking water.

Earlier this month, representatives from Washington and the Taliban concluded their second round of negotiations in Doha, Qatar, that they hope will lead to a peace agreement ending the 17-year-long conflict and to a US withdrawal. A third round is expected next month.

However, as Sputnik reported, even as these talks have continued, fighting between the Taliban and the US, as well as the Afghan government that it supports, has also continued — as have friendly-fire incidents by US forces. On March 13, a US airstrike hit an Afghan army base in Uruzgan province that had opened fire on a US convoy, which the Afghans mistook for a Taliban force; the strike killed five Afghan soldiers and wounded 10.

"Now, it's the Taliban that the US is negotiating with — not even the Afghan government so much, and certainly not civil society, women, young people, civilians who have been involved in trying to make peace in their country. They're being shut out."

Terrell noted the "the people and the entities that are pushing this war" aren't "blind to what's happening," telling Sputnik that the military-industrial complex foments "wars that are not intended to be won or resolved in any way, but that we can keep manufacturing and selling weapons [for]."

"In 2001, when the bombing of Afghanistan first started, Dick Cheney told the Washington Post that he thought the war would never end, would become a permanent part of the way that we live, would be normal," Terrell said, noting the then-US vice president "did not say that as some kind of fearful dystopian nightmare future — he was upbeat when he said that. It was opportunities for investments, for Haliburton, Lockheed Martin — an unending war was not something that he feared. It was a prospect that he welcomed."

Terrell said that what Afghanistan really needs is for the US to pull out and pay the country reparations in order for it to rebuild, not market the reconstruction off to US corporations for them to profit from the conflict.

"It's so horrible, and the efforts of the US and the international community have really not been toward anything that's really going to be helpful," Terrell said. "The end to this, after more than 17 years, is really just more elusive. And what they announced today, this recent attack, is just one more thing that's putting the goal of peace farther away."