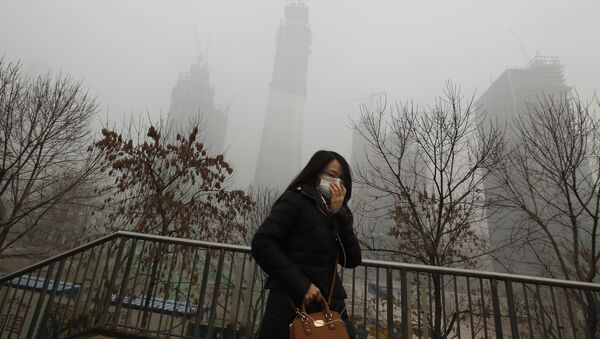 The researchers used a model to simulate atmospheric chemical processes and "interactions with the hand, oceans and biosphere," according to the study, to determine the global exposure of the population to air pollution in the year 2015. Although the study focused on Europe, statistical models were used to extend the findings to other parts of the world, leading to a worldwide figure of 8.8 million premature deaths each year.

According to the researchers, between 40 and 80 percent of deaths from ambient air pollution in Europe are due to cardiovascular events, such as heart attacks and strokes. In addition, the report found that air pollution reduces the mean life expectancy in Europe by 2.2 years.

"This means that air pollution causes more extra deaths a year than tobacco smoking, which the WHO estimates was responsible for an extra 7.2 million deaths in 2015," senior author Thomas Munzel, a professor at the University Medical Centre Mainz in Germany, told AFP.

"The number of deaths from cardiovascular disease that can be attributed to air pollution is much higher than expected. In Europe alone, the excess number of deaths is nearly 800,000 a year, and each of these deaths represents an average reduction in life expectancy of more than two years… Smoking is avoidable, but air pollution is not," he added.

In May 2018, the WHO estimated that air pollution in cities and rural areas had resulted in 4.2 million premature deaths worldwide in 2016.

The recent study published in the European Heart Journal also found that most deaths were caused by fine particulate matter, or PM2.5. PM2.5 consists of microscopic solids and liquid droplets in the air that are so small they can be inhaled and even absorbed by the bloodstream, according to the WHO.

The current average annual limit for PM2.5 in Europe is 25 micrograms per cubic meter, which is 2.5 times greater than the WHO guideline of 10 microgram per cubic meter.

"The current limit of 25 μg/m3 should be adjusted downwards to the WHO guideline of 10 μg/m3. Many other countries, such as Canada, the USA and Australia use the WHO guideline; the EU is lagging a long way behind in this respect. Indeed, new evidence may lead to a further lowering of the WHO guideline in the near future," Munzel is quoted as saying by the European Society of Cardiology.

On Tuesday, Scott Edwards, co-director at Food & Water Watch, an organization that champions healthy food and clean water for all, told Sputnik that the "biggest threat to air quality and public health arises from our reckless reliance on fossil fuels as our primary source of energy," noting the significance of shifting to wind, solar and geothermal systems.

"Combusting oil, gas and coal to drive our power plants, automobiles, heating and cooling systems and mass transit results in massive amounts of dangerous air emissions that impact local communities and costs billions of dollars in medical expenses. While much of the push for a rapid shift to clean, renewable energy economy rightfully focuses on climate change, we should also remember that moving to wind, solar and geothermal systems will also eliminate all the fossil fuel-emitted air pollution that is cutting many thousands of lives short every day," Edwards added.