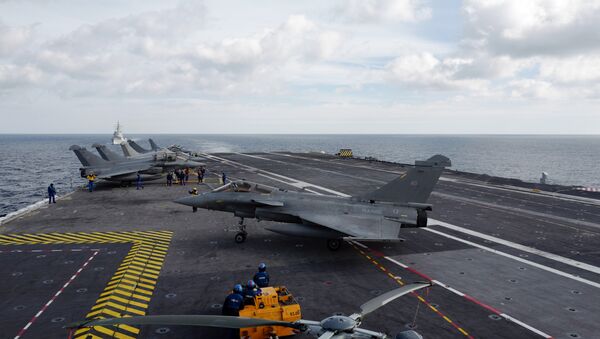 © AFP 2023 / VALERY HACHE
Subscribe
International
India
Africa
Germany and France are already building a joint aircraft and combat system, inviting other European states to join, as both Angela Merkel and Emmanuel Macron are pushing the idea of creating a pan-European army.

German Chancellor Angela Merkel has supported an idea recently brought up by her successor as the leader of the Christian Democratic Union, Annegret Kramp-Karrenbauer, who proposed creating a European aircraft carrier in an essay outlining her vision for Europe’s future.

“The next step could be to start on the symbolic project of building a common European aircraft carrier to express the global role of the EU as a power ensuring security and peace”, Kramp-Karrenbauer wrote in her op-ed titled Fixing Europe, which followed a programme letter by Emmanuel Macron, laying out his proposal for reforming the EU.

The current German head of government said that "it's right and good that we have such equipment on the European side, and I'm happy to work on it". However, she also added that the EU “has to do other things as a priority".

According to The UK Defence Journal, it is unclear, what the German leader meant — a jointly operated ship or for a common class of vessels. However, the outlet brands the latter the least likely variant, as it is more expensive. The UKDJ also points out that France has recently launched an 18-month study, at a total cost of $45 million, to find a replacement for its current aircraft carrier the Charles de Gaulle after 2030. A decision on the future carrier, which is expected to serve beyond 2080, is to be made after 2025. The website Defense World suggests that the above-mentioned joint European vessel could be one of the proposals.

France and Germany have already started developing the next-generation Future Combat Air System (FCAS) comprising a new fighter jet and accessory weapons. The fighter jet, which is intended to eventually replace France’s Rafale and Germany’s Eurofighter aircraft, is to become operational by 2040, while the first demonstration flights are expected in 2025. The contractors entrusted with the mission, funded by France and Germany equally, are Paris-based Dassault Aviation and Airbus, with its headquarters in Leiden, the Netherlands. Spain also joined the project in February, while both Paris and Berlin are inviting other European countries to join.

Preparatory work for the launch of the project has taken nearly two years, as plans to design the next-generation jet were announced by French President Emmanuel Macron and German Chancellor Angela Merkel in July 2017. Both leaders have for the last year been pushing the idea of a joint European army for the bloc, something that would be part of the wider transatlantic NATO alliance framework.