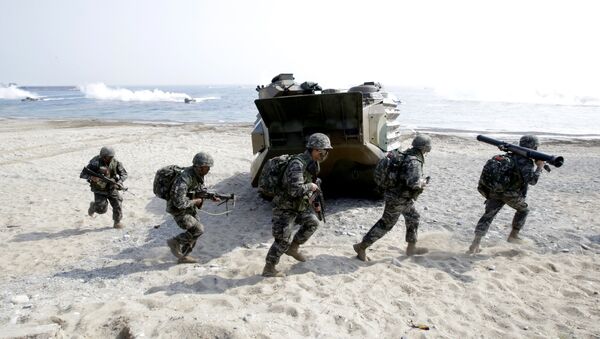 Word of the planned announcement come less than 48 hours after a summit between President Donald Trump and North Korean leader Kim Jong Un ended without an agreement.

The exercises — known as Key Resolve and Foal Eagle — will be replaced with smaller, mission-specific training, the report said.

In past years, North Korea has called the drills a practice run for a US-led invasion of the North.

US Carrier Strike Group Arrives in S Korea to Join Foal Eagle Exercises - Navy
Following his first summit with Kim in Singapore last June, Trump suspended the annual exercise, and Friday's report indicated that the US is preparing to make the suspension permanent.

Washington and Seoul held regularly joint military exercises, which were being perceived by Pyongyang as acts of aggression against the country. Russia and China have repeatedly condemned the United States for holding such drills and urged all the sides involved to refrain from provocations that could further escalate the situation on the Korean Peninsula.

However, the long-standing tensions on the Korean Peninsula reportedly started to ease after North Korean leader Kim Jong-un committed to denuclearizing and held historic summits with South Korean President Moon Jae-in and US President Donald Trump.