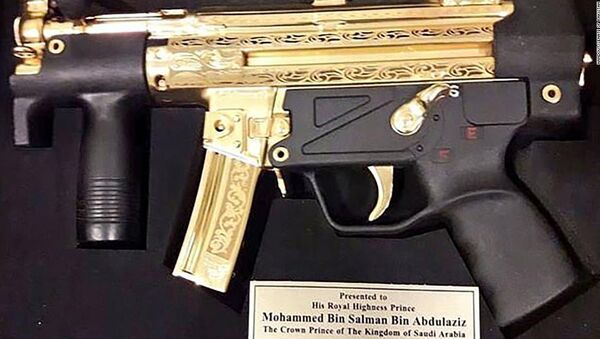 © Photo : Senate of Pakistan
Subscribe
Mohammed bin Salman did not leave Islamabad empty-handed - the heir to the Saudi throne, who embarked on an Asian trip last week, received a shiny new gun from Pakistani senators.

He was given a Heckler & Koch MP5, one of the most popular submachine guns in the world. The firearm was emblazoned with gold plates featuring an elaborate pattern.

Bin Salman was also given the Nishan-e-Pakistan, the country's most prestigious civil honour, and a portrait of himself.

During his two-day visit to Pakistan over the weekend, bin Salman agreed to release over 2,000 Pakistani prisoners held in Saudi Arabia and inked agreements worth $20 billion, mostly regarding supplies of Saudi oil and the development of Pakistan's energy industry.

READ MORE: US Aims to Weaken Mohammed bin Salman, Not Depose Him — Scholar

Pakistan was the first stop on bin Salman's Asian trip; on Wednesday, the crown prince arrived in India, where he said Saudi Arabia sees more than a $100 billion investment opportunity.

He touched down in the Chinese capital on Thursday to wrap up his tour 'Next up'. He is scheduled to meet with Chinese Vice Premier Han Zheng on Friday morning and with President Xi Jinping later in the day.

The crown prince was also expected to visit Malaysia and Indonesia, but scrapped these plans at the last minute without elaborating.

Last year has been tumultuous for bin Salman, who faced criticism from the international community following the October killing of dissident journalist Jamal Khashoggi in the Istanbul-based Saudi consulate.

Riyadh maintains that the royal family, including the crown prince, is not involved in the murder. Saudi Arabia's attorney general, in early January, asked for the death penalty for five of 11 suspects arrested in connection with the case.