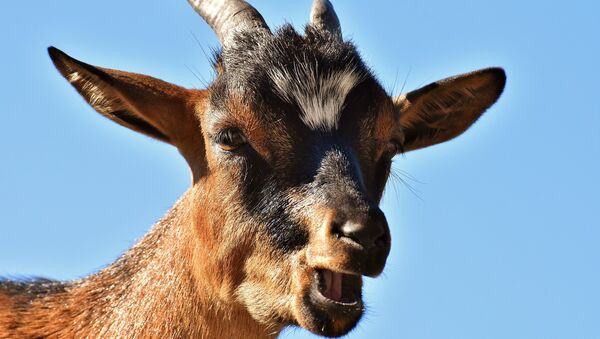 CC0 / /
Subscribe
Facebook founder Mark Zuckerberg has not been particularly liked on social media following a trail of scandals after reports of data breaches and trading users’ info with Cambridge Analytica. The recent revelations about the billionaire’s eating habits have hardly helped to boost his profile.

Twitter co-founder Jack Dorsey has sent shockwaves on the social media platform he created after he told Rolling Stone about one very particular dinner he once shared with a fellow tech executive — Facebook CEO Mark Zuckerberg. Asked about his “most memorable encounter” with the Facebook founder, he said that Zuckerberg killed a goat for him for dinner during the year when he pledged to eat what he was killing.

“He kills it with a laser gun and then the knife. Then they send it to the butcher”, the tech tycoon responded, making the interview question the “laser gun” part.

Dorsey guessed that it was a stun gun, after all, one should have used to knock an animal unconscious before knifing. He recollected that there’s a rule or regulation that you can have six livestock on any lot of land in the world’s tech centre, Palo Alto, California.

However, it was not the only surprise that night. According to Dorsey, they waited for about 30 minutes before going to the dining room to find that it was cold. According to him, it was “memorable”, admitting he just ate his salad.

“I don’t know what you’re going to do with that, but hopefully that’s not the headline. Revenge is a dish best served warm. Or cold”, Dorsey said anticipating the uproar.

As soon as the interview came out, Zuckerberg was slammed for his “cruelty” online.

Are u kidding me? How cruel!

Zuck enjoys murdering animals and selling your data to Russia because this is the worst worst dystopian hellscape since water world. https://t.co/Kjh48QLZKP

​He received different kinds of descriptions like a “nut job” or sociopath.

This guy is a nut JOB tool.

​Some jokingly referred to it as to both a satanic ritual and PR job.

Then they carved ax’s into their palms and became partners in hell. pic.twitter.com/v1YqfQO9h2

This is a sexual metaphor?

​There was no shortage of hilarious memes with shocked goats and celebrities.

There’s a lot to unpack on that one. pic.twitter.com/KBDZW0kb2x

​In 2011, Mark Zuckerberg made eating only the meat of animals that he himself killed his personal challenge, which he sets publicly each year.

“I’ve learned a lot about sustainable farming and raising of animals. It’s easy to take the food we eat for granted when we can eat good things every day”, he said to Fortune then.

000000
Popular comments
Molly Jong-Fast, you f'ing idiot. He didn't sell data to Russia, he sold it to the "good guys". Cambridge Anal-ytica is not Russian, you twat!

Kronus
24 January 2019, 17:18 GMT2
000000
For me in what mattrer´s of Zuckerberg, i have to accept him as a human now since he did what humans have been doing since before the first hape erected himself. I can´t already see him as a lizard or something else.