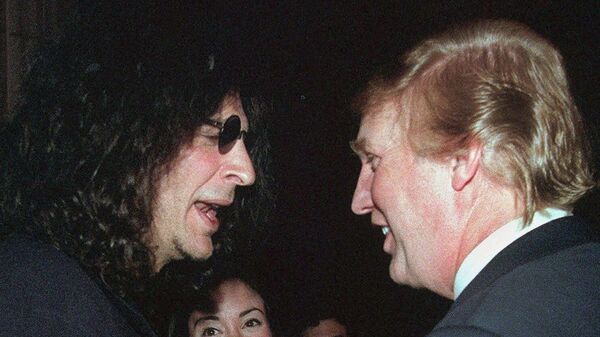 © AP Photo / AP images
Subscribe
International
India
Africa
Self-described US ‘King of all Media’ and longtime ally Howard Stern has turned the tables on frequent guest and friend US President Donald Trump, referring to the latter’s much-cherished wall on the US-Mexico border as a pointless campaign tactic that only “morons can get behind,” according to reports.

Migrants Cross US Border as CBP Agents Struggle to Cope Amid Shutdown
Stern's recent critique of his old pal Trump came as something of a surprise, given the history the two share, including discussing the president's first wife, Ivanka Trump as a "piece of ass" during a live broadcast.

The US entertainment titan did spare in remarks regarding his former ally in the celebrity whirl, starting with the president's complexion. "I never saw him this orange," Stern quipped before moving on to a withering critique of Trump's recent public relations attempts in support of his administration US border policy, according to Yahoo.com.

Although Stern noted that he had expected Trump's recent entreaties to Capitol Hill to be "full of s**t," even he was surprised at the level of the president's equivocation.

"There's no crisis" on the Mexico-US border, Stern pointed out, adding that Trump's demands amount to nothing more than a political stunt that "morons can get behind," cited by The Hill.

Stern also referenced the US Customs and Border Protection's own data, which has detailed that almost all illegal drugs arrive in the US not across the 2000-mile Mexico-US border as the president repeatedly claims, but through "our ports," according to multiple reports.

The president's partial shutdown of the US government — the longest in the history of the nation — occurring because Trump did not get the money for his wall, is causing a real national security crisis, according to Stern.

In noting Trump's partial shutdown of the US government to be a campaign tactic to get his wall, Stern pointed out that any physical barrier would be ineffective at best.

"The wall's a problem because it's a waste of money, even Donald knows that," Stern remarked, adding that "you gotta know Donald a bit to understand what's going on here."

"The wall's a simplistic answer to our problems with immigration. It's something that, you know, morons can get behind because they're like, ‘Oh, yeah, if you build a wall no one can get over it,'" he said, cited by Yahoo.com.

"But it's not that simple," Stern observed.

Stern was pointedly unapologetic about Trump, a former co-conspirator in media matters who has been a guest of the talk show host many times over the years.

Trump is not being "straight up" with his supporters, Stern claimed, adding that if the president had been a more recent guest on the show he would have been successful at creating positive sentiment for his increasingly unpopular policies.

Dysfunctional America: The Politics Behind a Government Shutdown
The 45th president would have been better off by being a Stern guest and stating: "‘F*** this, I'm not going to bulls*** you guys. I want $20 billion" for the wall, said the popular media personality, cited by The Hill.

Stern also admitted that Trump's own business practices have placed the president in a less than positive light, referring to illegal immigrants employed at a New Jersey Trump golf resort.

"You can't be hypocritical and be hiring illegal aliens," Stern noted.