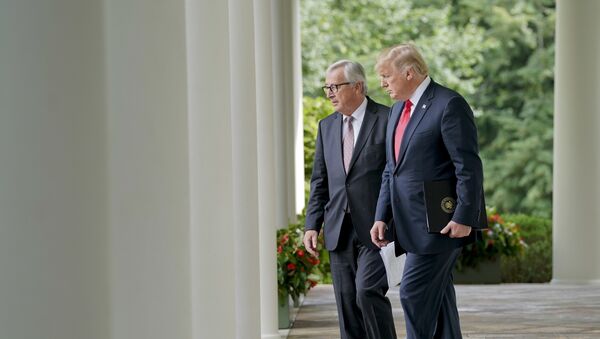 © AP Photo / Pablo Martinez Monsivais
Subscribe
International
India
Africa
US President Donald Trump has repeatedly slammed the European Union and urged its member states to defend their national sovereignty. He also described the bloc as an American "foe" in terms of trade and blamed European countries for their low defence spending.

Brussels has voiced anger over the White House's move to quietly downgrade the diplomatic status of the European Union’s ambassador to the US in 2018, according to The Independent.

The newspaper cited an EU spokesperson as saying that Washington had not notified the bloc of the unannounced "recent change" and that officials had discussed "possible implications" for the delegation in Washington with their US counterparts.

Speaking on condition of anonymity, an official in the EU's External Action Service told The Independent that "clearly we're not happy with this".

Meanwhile, members of the European Parliament delegation on EU-US relations have sent a letter to the US Congress, expressing concern about the "increasingly harmful attitude of the White House towards transatlantic relations".

Commenting on US demoting the EU mission's diplomatic status, they pointed out that "such steps play into the hands of competing global powers and can only lead to greater fragmentation, not much-needed expansion of cooperation".

"Together we can tackle cross-border issues related to climate change, economic inequality, digitalization and global terrorism. However, for this we must strengthen, not undermine, each other", the letter read.

The reaction comes after Deutsche Welle cited an unnamed EU official as saying that the bloc mission's diplomatic status in the US was downgraded from a member state to an international organisation in 2018, in a move that came to light only recently.

The official said that the US "conveniently forgot to notify" Brussels of the decision.

READ MORE: Trump Has Extracted 'a Lot of Concessions' From EU on Trade – Professor

It's unclear when the decision was made, but the EU mission noticed the first signs when its ambassador David O'Sullivan remained uninvited to a series of events last year.

Donald Trump Claims US Has No Ally 'Worse Than the EU' in Candid Interview
The source claimed that it became completely obvious when O'Sullivan was named last at the funeral of former US President George H.W. Bush in December, which didn't correspond to his earlier diplomatic status.

US President Donald Trump has repeatedly slammed the European Union, and he once called on its members to uphold their national sovereignty. Trump also called the EU an American "foe" when it comes to trade, blaming European countries for their low defence spending.

US Secretary of State Mike Pompeo, for his part, also levelled criticism at the EU in 2018, when he questioned whether bureaucrats in Brussels had "ensured the interests" of the bloc's states and their citizens.