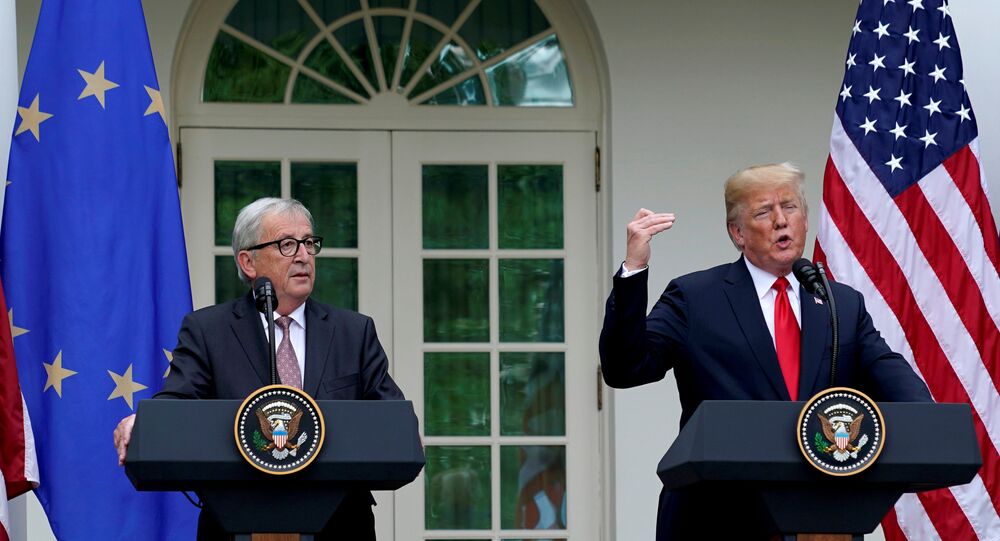 President Donald Trump and European Commission President Jean-Claude Juncker agreed to work toward “zero” tariffs trade relations, with Brussels also agreeing to buy billions of dollars’ worth of US exports, including natural gas. Sputnik discussed the talks with Inderjeet Parmar, professor of international politics at City University of London.

Sputnik: Some are saying that President Trump has made a concession to the EU with this deal, what do you make of that?

Inderjeet Parmar: Well, the key thing here is that I think that he’s actually got quite a lot of concessions from the European Union. The EU is going to take a lot more liquid natural gas from the United States, which is more expensive than the one which is coming from Russia in the future. So I think that is an important concession, and he’s also extracted a greater level of imports for US soybeans, which helps out the farmers, who lost out with the China tariffs on American soybeans. So, what he’s actually done is a ceasefire on tariffs on auto, not saying that it’s over, that there’s not going to be any, set up a working group but I would say that he’s extracted more from the European Union than they have gained from him in the long run. He can pull out of that, the auto ceasefire any time he wants.

Sputnik: And do you see this agreement between Juncker and Trump as signaling that the days of a possible EU-US trade war are now behind us?

© AP Photo / Pablo Martinez Monsivais
Juncker Told Trump EU Would Help US Deal With 'China Problem' – Trump Adviser
Inderjeet Parmar: I don’t think so, no, for the reasons I just said. I think Donald Trump plays a very high-risk game – he’s transactional in character and he’s extracting as much value by using the carrot of continued US market access and he’s able to extract a lot of concession, and I suspect then on autos he’s going to be able to extract them in the future. So I don’t think the trade dispute between the US and the European Union has gone away. I think it’s entering a completing different phase I guess, where they are going to try and work through some of the aspects, but I think the European Union in effect has had to capitulate actually.

Sputnik: Standing shoulder-to-shoulder with Mr. Juncker, Trump declared that we’re entering a “new phase” of US-EU relations – is that true, and if so, what could this ‘new phase’ look like?

© CC0
EU May Shrink to Point Where it No Longer Has Major States - Juncker
Inderjeet Parmar: Well, I think President Trump works at different levels. One is at the level of rhetoric and that rhetoric is largely sort of direct at his political support, and I think his political support will be boosted by this. And so he’s aiming at that audience, but at the same time, he’s using America’s market access and the power of the dollar. Most European bank assets are held in dollar currency, not euros, and he knows how valuable that is to the European Union. So I think what it means is that Europe will now want to try to win one concession, and I think that main one will be to make sure that future disputes are channeled through the World Trade Organisation (WTO). The US has been asking for a reform of the WTO and I think the EU wants to work through that. That maintains a semblance of a rules-based order but it also means that they are going to collaborate on what the new rules might be, and how that will then be used to pressurize China.