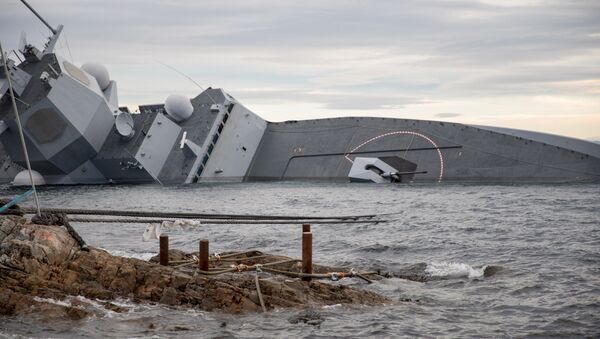 While the Norwegian Navy has taken urgent measures abroad for the peers of the sunken frigate KNM Helge Ingstad to prevent inundation, the Spanish shipyard that manufactured the hapless warship has accused the Norwegian authorities of looking for excuses.

Following an interim report by the Norwegian accident investigation commission, which blamed technical errors in waterproof bulkheads on board the KNM Helge Ingstad that sank after a collision with an oil tanker while returning from NATO drills, the Norwegian Navy has completed temporary measures to prevent rapid inundation of warships of the same class in the event of similar collisions, the tabloid daily Verdens Gang reported.

The Defence Material Agency said inflatable belts were installed as a temporary solution to seal the hollow propeller shaft in order to prevent water from entering the frigate's engine room in case of an emergency.

According to the report, which blamed the frigate's rapid sinking on a construction error, saltwater first penetrated the generator room of the KNM Helge Ingstad, before spreading to other rooms and finally reaching the engine room.

"All the [Nansen-class] frigates are built in the same way. The Navy has implemented interim measures on three out of four frigates", Steinar Nilsen, maritime chief at the Defence Material Agency told Verdens Gang.

The fourth frigate, the flagship KNM Fridjof Nansen is currently in the process of a major, planned maintenance. The vessel will receive inflatable belts when it is re-launched in April next year.

However, the claims of the warships being less waterproof than stated made the Spanish shipyard that manufactured the Nansen-class frigates, currently considered the backbone of the Norwegian Navy, see red.

"We have never received such complaints ever before. Not even once", Navantia Shipyard official and union leader Javier Galán told national Norwegian broadcaster NRK.

He dispelled the Norwegian Navy's allegations of a faulty construction of the propeller shaft being the culprit.

"Had the shaft leaked water in this way, it would have become obvious far earlier. Also, the frigate would have sunk long ago", Galán said.

According to him, the propeller shaft must have been damaged during the collision itself, which is the only explanation why water appeared between the sections altogether.

"Imagine you have a car. Even if it's a good one, it will run into problems if you crash it", Galán said.

Galán blamed erroneous navigation, venturing that the crew had misinterpreted the lights from the Maltese-flagged tanker Sola TS, mistaking it for solid land.

"I believe the only thing they are looking for is cop-outs. The way I see it, it's just passing the buck. The crew should have avoided the collision", Galán said.

Navantia issued a statement ensuring that the Nansen-class frigates shipped between 2006 and 2011 to the tune of NOK 21 billion ($2.5 billion), fulfilled all technical requirements before handed over to Norway. Meanwhile, Galán stressed that the accusations may lead to the company's reputation being damaged, which is the fifth-largest in Europe and ninth-largest internationally.

"We are an international company. And this makes a terrible damage, because it leaves an impression that we are unable to make ships. Even though we have been doing it for centuries", Galán said.

Navantia dates back to military shipyards established by the Spanish crown in 1730. Over centuries, it has gone through several name changes, the recent one in 2005. It is 100 percent owned by a government holding.

The KNM Helge Ingstad collided with the Sola TS on November 8, while returing from the NATO drill Trident Juncture off Trøndelag's coast. The vessel suffered a large hull breach, lost control and was manoeuvered into a shallow bay to prevent rapid inundation.

The Sola TS is currently being repaired in Gdansk, Poland. According to its owner, the Greek shipping company Tsakos Energy Navigation, it will be back in the water by mid-December.