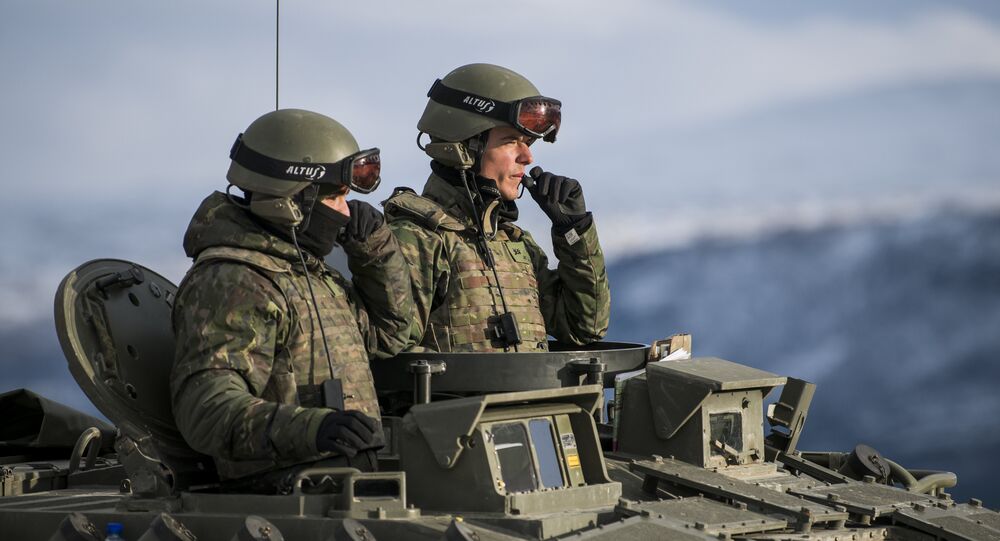 'Best' of NATO Mega Drills: From Pooing in Public to Pub Crawling and Beyond

On 7 November, Trident Juncture 2018, the largest collective defence exercise NATO has seen in recent decades, which was held in Norway and adjacent waters of the North Atlantic and Baltic Sea, including Iceland and airspace of Finland and Sweden, came to an end.

Trident Juncture 2018, which spanned all of Scandinavia and Iceland, was the largest NATO war-game exercise since the Cold War, involving about 50,000 troops from 31 countries. The drills, however, seemed to have left a questionable mark in history due to foreign soldiers’ conduct.

© REUTERS / Lance Cpl. Menelik Collins/ U.S. Marine Corps
'S****y Job': Norwegians Grumble Over Defecating NATO Soldiers During Mega Drill
Ahead of the start of the military exercises in October, US troops landed in Iceland, where they didn’t waste any time and apparently drank all the beer in the nation’s capital, Reykjavik in a single weekend.

A number of downtown bars ran out of the alcoholic beverage, with American sailors and Marines pub crawling in a bid to satiate their thirst, Iceland Magazine reported.

Some breweries were even forced to send out emergency supplies to the bars: it turned out that foreign soldiers preferred local beers over imports and were craving to sample microbrews as well as the more popular standard lager.

A total of 442 complaints have been filed with the Norwegian Armed Forces during the NATO drills, with many drawing attention to the fact that foreign soldiers didn’t hesitate to do a number two near public places, such as kindergartens, schools and sports facilities, national broadcaster NRK reported.

And while most of the complaints came from famers whose plots and pastures appeared to have been damaged by armoured vehicles and piles of human waste, others fulminated against the unsanitary conditions left by NATO troops.

“This is terrible; it’s about having common decency. We have to clean up after soldiers who have relieved themselves. It’s literally a sh**ty job,” Major Marianne Bø, responsible for damages and environmental protection during the drills, was cited as saying by NRK.

It seems that ‘unfortunate things’ happened all through the war games: shortly before the exercise came to an end, NATO troops bruised and handcuffed a handicapped man suffering from autism after he went for a regular stroll near an old building, which had been temporarily turned into barracks, housing hundreds of soldiers.

© REUTERS / Bundeswehr/Handout via REUTERS
NATO Soldiers Injured as Tank Collides With Car During Massive Wargames in Norway
When the man came closer, they told him to stop, but the man allegedly failed to follow the orders, which was perceived as suspicious behaviour and led to his arrest.

The 46-year-old man’s family revealed that he was left traumatised by the incident; they also stressed that despite the fact that his diagnosis implied he could not stay calm in stressful situations, he would never try to run away from the military.

The incident was confirmed by Commander Captain Frank Staurset, who apologised for the soldiers’ way of handling the matter.

NATO on a Collision Course

Just when the military thought the drills – along with the string of bad luck – were over, another mishap occurred.

Billed as ‘unsinkable,’ Norwegian frigate Helge Ingstad was returning to base after taking part in the Trident Juncture drill when it collided with Sola TS, a Maltese oil tanker, prompting an hours-long operation to halt fuel leakage and save the military vessel from sinking.

The collision, which occurred outside Equinor’s Sture oil terminal, resulted in a suspension of all shipping activity; all 137 people on board the frigate were evacuated, with eight sailor sustaining injuries. The Malta-flagged tanker, in turn, suffered minor damage and returned to port for inspection.