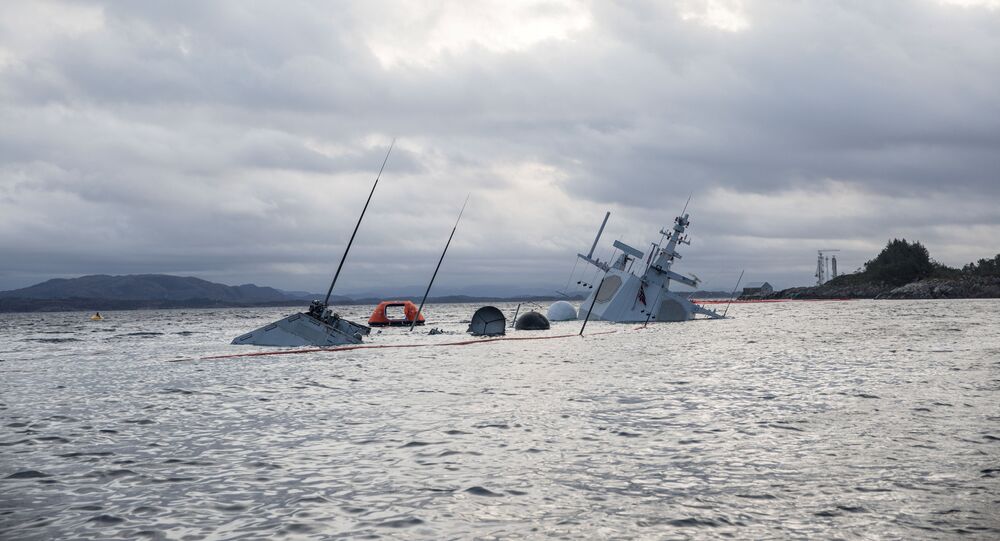 A formal investigation into the expensive Norwegian frigate KMN Helge Ingstad, which sank while formally still under NATO's command, has failed to identify the causes of the recent years' most serious catastrophe in the Norwegian Navy, prompting severe criticism from an old seadog.

Eivind Sanden Vågslid, a former top official at Norway's state maritime directorate and a long-standing member of the UN's International Maritime Organsation (IMO) has unleashed scorching criticism against the preliminary report on last month's collision, which resulted in the near-sinking of the frigate KNM Helge Ingstad.

In a lengthy opinion piece Vågslid penned for national broadcaster NRK, he stressed that the report only "fuelled ongoing speculations", calling on the investigators to issue an "updated and improved" report instead of the recent one, which he called "thin soup", as soon as possible.

While suggesting human error and ruling out technical problems on board the warship, the report nevertheless failed to correctly address the issue of responsibility, Vågslid wrote, describing it as a "smokescreen" with no conclusions.

While the report called the accident a complex problem, going so far as to claim that no single factor can be identified as the reason for the collision between the frigate returning from NATO drills and a fully laden oil taker in the early hours of November 8. Vågslid strongly disagreed, claiming that the report exaggerated the role of the tanker and downplayed that of the frigate and its crew.

"The reason [for the collision] was negligent navigation of the frigate, there is no doubt about that", Vågslid wrote, calling the collision an "embarrassing affair" for the Norwegian Navy. By his own admission, he was both surprised and disappointed over the accident and the way it was handled.

Vågslid cited fundamental navigational regulations that oblige vessels to always turn starboard (to the right) when attempting to avoid a crash.

"Turning to the left is a major and grave mistake which no one on the bridge ever shall make", the retired maritime director wrote, stressing that the accident investigation commission should have highlighted this error immediately.

Vågslid wrote that the frigate should have reduced its speed and never turned left in the first place. Instead, the crew proceeded to sail south at about 17-18 knots and turned port (to the left).

The seven crew members on the bridge (which is a violation of the regulations per se), including an American, whose role hasn't been clarified yet, reportedly mistook the large tanker for part of the oil terminal itself, which it had just left.

Vågslid didn't buy the crew's explanation that they swung left to avoid colliding with a stationary object.

"Normal navigational instruments would have given them a very good picture that they were several hundred metres from land," Vågslid wrote.

The accident investigation commission is yet to comment on Vågslid's criticism. The collision is also being investigated by local police. Norwegian defence officials have remained mostly silent, despite launching an investigation of their own. Defence Minister Frank Bakke-Jensen has been criticised for complaining about the media coverage of the recent years' biggest accident inolving the Norwegian Navy by claiming the press have been asking too many questions.

​Meanwhile, the KMN Helge Ingstad will remain lying on its side half-submerged in a shallow bay at least until Christmas, as harsh weather conditions impede the salvaging operation, NRK reported.

The 134-metre-long Helge Ingstad collided with the Maltese-flagged tanker TS Sola when returning from the Trident Juncture NATO drills. Most of its expensive equipment is believed to have suffered considerable damage from saltwater.