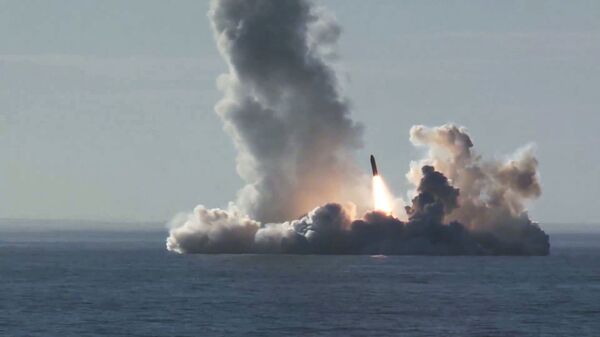 The Russian foreign minister has commented on the demand from US Undersecretary for Arms Control Andrea Thompson, which requires that Moscow either terminate the development of its 9M729 missile system or modify the weapon, pointing to its alleged non-compliance with the Intermediate-Range Nuclear Forces (INF) Treaty.

Addressing Washington's plan to suspend its adherence to the INF Treaty in 60 days, announced by Secretary of State Mike Pompeo, Russian Foreign Minister Sergei Lavrov stressed that Moscow had never received documents from the US on the matter of alleged violations of the agreement, once more noting that Washington's accusations against Russia are baseless.

"We remind you once again that when the United States started accusing us of violating the treaty several years ago, it was doing it groundlessly, and we had to literally drag information out of them in order to understand what they were talking about and what they meant," Lavrov said at a press briefing.

READ MORE: US Official: 60 Days Given to Russia on INF Treaty 'Not Ultimatum'

According to the minister, the 9M729 missile system, which prompted the American side’s concerns, was tested by the Russian military at range permitted under the INF Treaty. He underlined that Russia had to "literally drag information" out of Washington in order to understand their claims.

'It’s Virtually Certain US Will Pull Out of INF Treaty' - Former US Diplomat
He stated that Moscow proposed to discuss the issue at NATO-Russia council, but the US blocked the initiative.

According to the minister, the United States may have started preparing the ground to derail talks on the prolongation of the New Strategic Arms Reduction Treaty (New START).

"We have suggestions that we have repeatedly communicated to the United States, including in Helsinki, when [Russian] President [Vladimir] Putin met with [US] President [Donald] Trump. I have personally submitted suggestions to [US] Secretary of State [Mike] Pompeo, then these suggestions were repeated during [US National Security Adviser] John Bolton's August visit [to Russia], and in October, when he came again. These were suggestions to start a serious, honest, and professional dialogue on the INF, on the START implementation, as well as a range of other suggestions on how we should tackle strategic security problems," Lavrov said.

"We have not received any answer from Americans. We are occasionally reminding them of it, but they have just one answer: 'You should correct your mistakes, and rectify your violations'," Lavrov added.

The diplomat also stated that the situation within the OSCE area has become tense, noting that some members of the organisation are increasing their military presence near their borders with Russia.

"We see that our colleagues from NATO are pursuing a course of deterring Russia, that they are increasing their military activity near our borders, and creating military infrastructure at the 'Eastern front', as they call it. Instead of opting for diplomacy, they are trying to voice groundless accusations, which do not facilitate dialogue. A better understanding of mutual concerns can be reached only via dialogue", Lavrov said at a briefing.

He also commented on the sanctions against Moscow, stating that currently, the EU is being "held captive by a small, but a very aggressive Russophobic minority", which prompts the Russian government to defend the country from sanctions.

"This is an eternal issue, an inexhaustible one. I have nothing to say here. It's all the same pretext — when we are accused of violating a treaty, interfering in elections, trying to subjugate cyberspace, and the media space in general, to our interests, but I haven't seen any evidence so far", the minister said at a press conference following the OSCE Ministerial Council meeting.