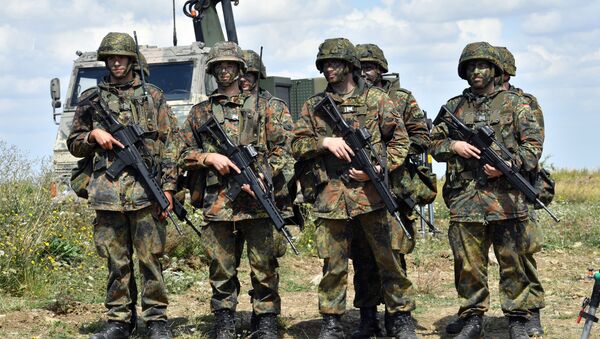 © AFP 2021 / Martin Schutt / dpa
Subscribe
The future of a proposed European army largely depends on how the relationship between the US and Europe will evolve, Justice and Development Party (AKP) member Ali Sahin has told Sputnik, stressing that Washington had alienated the EU with its harsh security and economic policies.

"European security is inextricably connected with Turkey, which serves as Europe's most important gateway to the east. Therefore I believe that without the participation of Turkey this initiative cannot be effectively pushed forward," Sahin pointed out, arguing that Turkey is an integral part of Europe, both historically and culturally.

Sahin, who is also a member of Turkey's Grand National Assembly (TBMM), believes that the idea of European defence forces championed by French President Emmanuel Macron has taken on a new meaning amid Brexit and the formation of new centres of power in the world.

"Currently, the formation of new regional centres of power is underway," he said. "Today, the United States, Europe and Asia are not the same as they used to be. The idea of creating a pan-European army was formulated under the influence of changes in the world, both economic and political, the creation of new geographic centres of power, and the rise of new regional and global forces, such as China, India and Turkey".

'Real European Army': Macron's Initiative is Taking Shape Step by Step
According to Sahin, the US has alienated Europe through tough security policies which included the use of NATO and the dollar as a 'stick'. He said that Washington had increased economic pressure on European states by imposing financial restrictions and fines against some European countries, adding that this situation had obviously prompted the EU to take measures to ensure its security.

Commenting on the prospects of the Macron-promoted initiative Sahin suggested that it would depend on how the EU-US relationship would evolve.

"If Europe does not feel safe within NATO, and the United States continues to exert pressure on various regions, including Europe, then this idea is likely to receive further reinforcement. However, I personally do not think that this step will be taken in the near future," Sahin opined.

Earlier, Justice and Development (AK) Party spokesman Omer Celik voiced similar views stressing no security can be ensured in Europe without Turkey's involvement either within the framework of NATO or the proposed European army.

"Three or five years ago this would have been unthinkable. It clearly shows an emerging crack in the transatlantic alliance," he said, referring to the idea of forming European defence forces.

"We have to protect ourselves with respect to China, Russia and even the United States of America," the French president stressed.

German Chancellor Angela Merkel echoed Macron on 13 November, while delivering a speech before the Members of the European Parliament in Strasbourg: "We have to look at the vision of one day creating a real true European army," she said.

The next day the European Commission (EC) expressed 'delight' over the Franco-German concord on the European army issue.

"We have many times explained how we see these things. This is the commission that wants Europe to have a meaningful defence identity… We have proposed a significant increase of EU resources for defence in the multi-annual financing framework. We have so much work and so much activity, and we are delighted that the political atmospherics around this work seems to be right and is going in our direction," the EC spokesperson, Margaritis Schinas, said on 14 November.

She referred to the fact that the idea was first voiced by European Commission President Jean-Claude Juncker who had long propagated the concept.

"In the very long run, we will need a European army. Because we have to be credible when it comes to foreign policy," Juncker tweeted on 20 May 2014.

000000
Popular comments
Turkey is part of Europe because of Eurovision. And Israel and Australia as well. Transcendental geography.