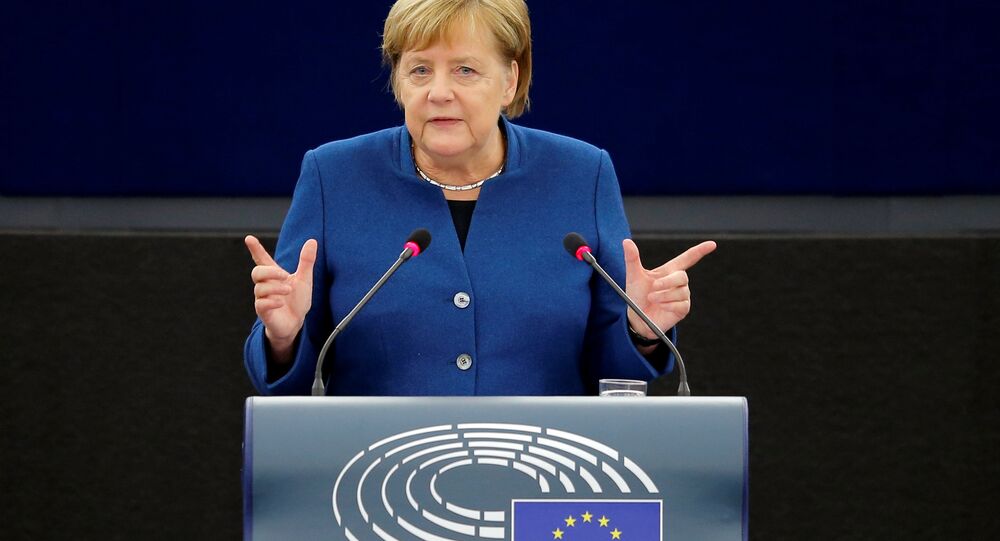 German Chancellor Angela Merkel has delivered a speech before the Members of the European Parliament in Strasbourg on November 13.

When speaking about plans to create the European army, which have been strongly criticised by the US president, Merkel said that it could be a "good supplement to NATO."

"We have to look at the vision of one day creating a real true European army," she stated.

The German Chancellor has backed French President Macron's proposal, stressing that "Europe must take its fate in its own hands." In order to coordinate the issue, she also proposed to establish a "European security council."

Merkel added that "only a united Europe can be strong enough to be heard on the world stage," and urged the EU countries "to come to common solutions in areas where treaties would allow it."

© REUTERS / Kevin Lamarque
Trump Launches Massive Twitter Crusade Against Macron Amid EU Army Row
Earlier in June, Macron already proposed to create a joint European military force that was supposed to intervene in hot spots around the world. According to Merkel, this project must fit into the structure of defence cooperation in the bloc.

Commenting on the recent Macron's proposals, US President Donald Trump said it was very insulting of the French President and noted that Europe "should first pay its fair share of NATO, which the US subsidizes greatly."

The German Chancellor also addressed the problems of the Eurozone.

"Our common currency can only function if every individual member fulfils their responsibility for sustainable finances," Merkel said.

She also told the European Parliament that a European digital tax may be introduced if the global project on the issue fails.

"We think the best thing would be to find an international solution in an international context… but if that doesn't work, we can't wait forever but rather need to act at the European level and that's what Germany is pushing for," Merkel stated.

Previously, the European officials warned of an economic slowdown across the Eurozone due to the uncertain course of the Brexit negotiations, clashes with Rome over the Italian budget and the global trade wars.

Merkel currently talking about her vision for Europe. Central theme so far: solidarity as an integral European value (mentions Brexit and thanks Barnier) as is each Member State's responsibility for safeguarding EU and EU solidarity whilst pursuing national interests.

NATO Has No Intention to Deploy New Nuclear Missiles in Europe