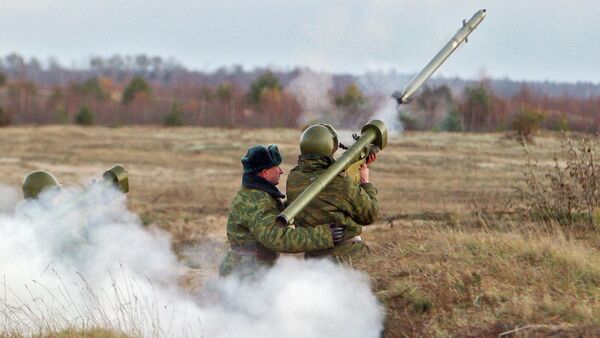 "Yes, our Igla won [the tender]," the source confirmed.

There have been no comments from the Russian Federal Service for Military-Technical Cooperation (FSMTC) on this issue so far.

The service, however, confirmed that Moscow and New-Dehli had also signed a package of contracts that included the supply and manufacture of Russian Project 11356 frigates in India.

T-14 Armata in the Spotlight as Indian Army Chief Visits Russia
The FSMTC did not specify the parameters of the contracts, however, according to unofficial data, the contract for the supply of two ready-made ships is about $950 million.

The statement was made on Monday after the Indian broadcaster NDTVreported, citing its sources, that Russian state arms exporter Rosoboronexport had emerged as the lowest bidder in the Indian tender to procure a batch of short-range air defence systems. Swedish manufacturer SAAB and French MBDA were other contenders for the deal.

Prior to that, in early October, Russia and India signed a historic agreement on the supplies of S-400 anti-aircraft systems worth over $5 billion.

READ MORE: Hitting Where It Hurts: Why Russia, India and China Are Growing Non-Dollar Trade

Igla is a man-portable infrared homing surface-to-air missile defence system manufactured by research and production corporation Konstruktorskoye Byuro Mashynostroyeniya (KBM). The system is intended to target various types approaching and receding aircraft and unmanned aerial vehicles round the clock when they are visually observed against clutter background and in infrared countermeasure environment.