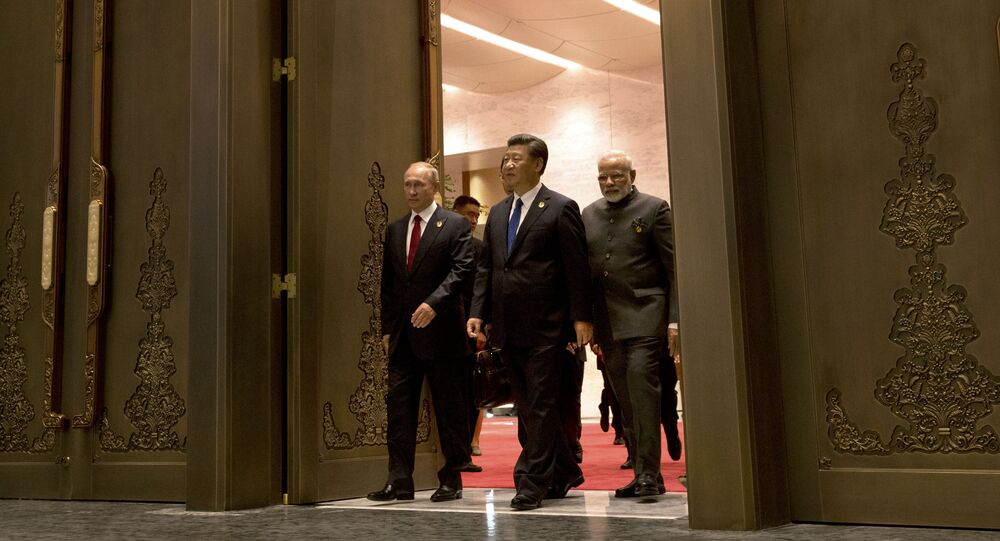 Much has been made of the possible geopolitical motivations behind the decision to price the $5 billion Russian-Indian S-400 deal in roubles, and Moscow and Beijing are eyeing another rouble/yuan-based trade compact. However, Sputnik has discovered that there's also a purely economic reason for the three countries to move away from the dollar.

On Wednesday, Russian state development bank Vnesheconombank chief Igor Shuvalov confirmed that Russia and China were working on another agreement for trade settlements in each others' national currencies, with the news following on the heels of last week's announcement that India would be paying Russia for its S-400 air defence system in roubles.

Sputnik has already written about why the rouble-denominated S-400 deal was at least partially a geopolitical decision, allowing New Delhi to demonstrate that it's not a US "vassal", and ensuring that both countries can avoid the headache of possible US sanctions, like the ones Washington slapped on China earlier this year over its purchase of Russian armaments.

However, there's another practical reason for the recent moves by the three developing economies to turn away from the greenback: the exchange rate.

© Sputnik / Alexandr Demyanchuk
Russia, China Can Sign Deal on National Currencies Payments by End of Year - Russian Bank
According to CNBC, the drop appears to be connected to US monetary policy, with the Federal Reserve raising interest rates over half a dozen times since President Trump took office and promising 5 more increases over the next 15 months.

In this situation, and given President Trump's ongoing trade war against economic adversaries and allies alike, it makes sense that major economies are looking for alternatives to dollar-denominated trade deals, which were previously considered to be a mark of stability and convenience.

Taking the Russian-Indian S-400 deal as an example of why non-dollar trade makes sense, Russian economics observer and Sputnik contributor Alexander Lesnykh began by calculating that the $5 billion transaction is equivalent to about 331 billion roubles according to the Russian Central Bank's exchange rate.

"For comparison, on January 1, the dollar was worth 57.04 roubles, and 65.6 roubles on November 1. The maximum price reached this year was 69.9 roubles, the minimum 55.6 roubles. That's a volatility corridor of 14.3 roubles," Lesnykh wrote. In other words, the analyst noted, "the difference in terms of this indicator between the rouble/dollar and rouble/rupee pairings is an astronomical 11,000 percent."

© Sputnik / Alexey Malgavko
Double Trouble: Why Ruble-Priced S-400s for India are Big Problem for Washington
A similarly stable picture can be observed in the exchange rate between the rouble and the Chinese yuan, with 1 rouble worth 0.11 yuan on January 1 and 0.10 yuan on November 1. For the record, the rupee-yuan exchange rate has been similarly steady, with trading closing at 9.8 yuan per rupee on January 1 and 10.5 yuan per rupee on November 1, fluctuating 7 percent throughout the year compared to much more serious fluctuations in rupee-dollar and yuan-dollar exchange rates.

Moscow has signalled that it would be only too glad to increase non-armament trade in national currencies with New Delhi, with the civilian sector accounting for nearly 80 percent of the $9.1 billion in trade turnover between Russia and India in 2017.

"Today, the share of trade in roubles in exports is 20 percent, and about 21 percent for imports", Deputy Prime Minister Yuri Borisov said at a press briefing in September. "This is a good indicator, but we will nevertheless be increasing payments in national currencies as a means of solving the problem of non-payment. This also applies to contracts in military-technical cooperation", Borisov added, alluding to an incident back in April when Indian banks froze over $2 billion in Russian-Indian defence-related deals out of fears of US sanctions.

© AFP 2021 / ALEXANDER NEMENOV
German Media Admits Russia's 'Paradox' Economic Growth Despite Sanctions
In the case of Russia's trade with China, the idea of switching to rouble-yuan trade is simply becoming a matter of common sense, as dollar instability continues and trade grows, with total trade turnover hitting some $84.9 billion in 2017.

Ultimately, as China, India and Russia, the world's three largest developing economies, begin to enjoy economic dividends of the decision to move away from the dollar, it would only make sense for other developing economies facing the Fed's destabilising policy to start doing the same.

Double Trouble: Why Ruble-Priced S-400s for India are Big Problem for Washington