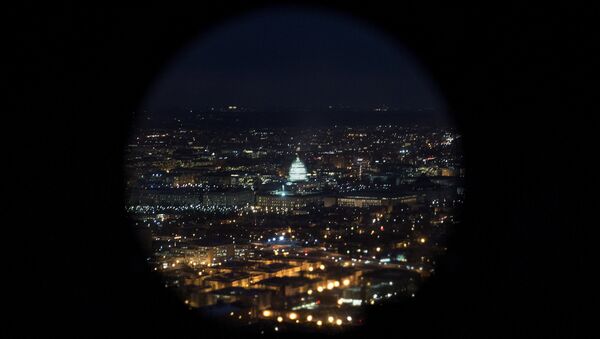 The Republicans' performance in the midterms proved unexceptional, with Democrats capturing the House while Republicans expanded their Senate majority. But what impact, if any, will the new Democratic majority in one of the houses of Congress have on US monetary and foreign policy as it relates to Russia? Sputnik explores.

In Tuesday's vote, the Democrats won control of the House of Representatives, picking up 7 more seats than the 218 required to form a majority. The win, according to some pundits, has given the Democrats a measure of leverage and "the ability to check President Trump's power." In the Senate, things didn't go as smoothly for the party, with Democrats losing three seats and the Republicans expanding their majority, with more gains possible after special elections in Mississippi and Minnesota.

There are a number of things House Democrats can do to try to put a spoke in Trump's agenda, including new investigations or moves to block legislative initiatives such as funding for the Mexico border wall. However, there's generally little they can do to challenge US monetary policy, which is delegated to the Federal Reserve, much less have Trump impeached, which requires the support of two thirds of lawmakers in the Senate. Before the vote count was even complete, House Democratic leader Nancy Pelosi said her party was ready to "work together" with the president, with Trump reciprocating the goodwill gesture. At the same time, Republican control of the Senate, which the House must cooperate with to pass important legislation, makes serious Democratic ambitions to check the White House difficult.

On Thursday, the US Federal Reserve reported that interest rates would remain unchanged at 2.25 percent, with the dollar index up 0.72 percent in trading against a basket of six competitor currencies after facing a slight dip earlier in the week amid expectations that a Democratic-controlled House wouldn't be as supportive of further tax cuts.

Hitting Where It Hurts: Why Russia, India and China Are Growing Non-Dollar Trade
Sputnik has already written about how the increased volatility surrounding the dollar, traditionally regarded as the world's reserve currency, has led to major developing economies including Russia, China and India to substantially increase their non-dollar denominated trade.

A recent CNBC study found that among 143 currencies, over 80 percent have declined in value relative to the dollar since January, with developing economies, including the BRICS countries, facing the biggest drops. The drop is said to be connected to the US Federal Reserve's policy, including its decision to raise interest rates repeatedly since President Trump took office, and expectations that it will do so at least once more before the year's end. With Congress rarely intervening in Fed policy, it's unlikely that the changing makeup of the House will have any serious impact on the strong dollar or the flight from the greenback in developing country trade.

Speaking to the Financial Times, Lena Komileva, chief economist at (g+)economics, said that as far as the dollar is concerned, a divided Congress should prove benign, since "adding more fuel to the economy with a fresh fiscal stimulus, when there is already little spare capacity left and inflation risk is on the rise, would have risked rapid rises in US yields and the dollar risking another recession," something neither Washington nor the Fed want.

The election results have led some observers to speculate that Democratic control of the House will mean "more sanctions" against Russia, with Foreign Policy going so far as to suggest that while the midterms "marked a setback for President Donald Trump…they might be worse for Russian leader Vladimir Putin." 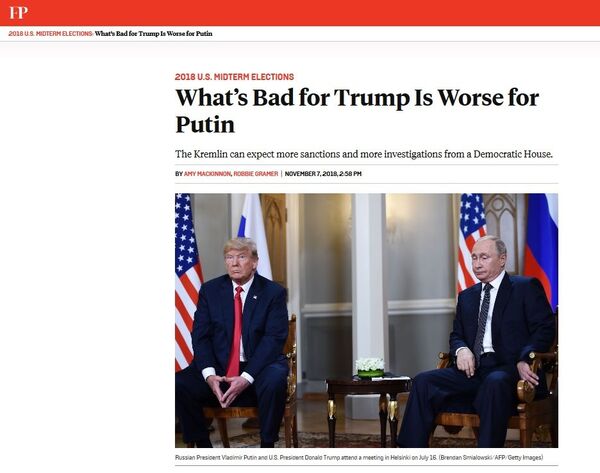 As evidence, the magazine explained that the Democrats will likely push for more investigations into so-called Russian meddling into the 2016 elections, with both parties also "likely to push for more sanctions against Moscow – for everything from its involvement in Ukraine and Syria to its poisoning of a former Russian spy."

However, with the Trump administration already proving its commitment to Obama-era sanctions against Russia over a two year period, and having introduced several rounds of new restrictions, including Crimea-related restrictions announced Thursday, it's unclear how exactly a Democratic majority in the House can change anything in the sanctions department.

US Sanctions 9 Russian Entities, 3 Individuals Over Crimea - Volker
If anything, in his two years in office, President Trump's policy, including his decision to repeatedly bomb Syria, expand anti-Russian sanctions, close Russian consulates, expel diplomats, dramatically expand NATO's presence in Eastern Europe and threaten to withdraw from the Intermediate-Nuclear Forces Treaty have left Moscow with few illusions about the president's ability or desire to fix relations which reached a post-Cold War low point under his predecessor.

According to the Atlantic Council, a neoconservative Washington-based think tank, the only practical impact the midterm results might have will be to push Senate Republicans to develop a new unified sanctions bill "to head off what may come out of" "an overeager Democrat-led House."

However, as Russian President Vladimir Putin pointed out last month, the only thing tightening US sanctions have done up to now has been to undermine the dollar's credibility as a reserve currency and push Moscow and other powers, including even Washington's European allies, to look for alternatives.