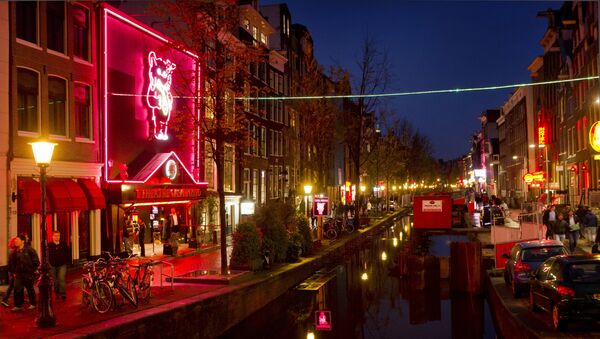 © AFP 2023 / Koen van Weel / ANP / AFP
Subscribe
International
India
Africa
Three parties, which run Amsterdam city council, have come up with a list of proposals for the world-famous Red Light District during a discussion on the future of prostitution in the city center.

The three coalition parties – GroenLinks, D66 and the Socialists, have suggested issuing sex worker permits for locations outside  De Wallen, the best-known Red Light district in Amsterdam, so that the women who work  in window brothels can move to a safer area, Het Parool, a Dutch-language outlet, reported.

Due to the surge in tourism, prostitutes have experienced a lot of inconvenience, including gawping, abuse and relentless photo-taking, the councilors claimed.

“Think of a sort of hotel with rooms, equipped with an alarm button, a safe for the money and security cameras outside. Thanks to the permit system, we can make this alternative location as safe and as attractive as possible for the sex workers themselves,” GroenLinks councilor Femke Roosma said.

Meanwhile, D66 councilor Alexander Hammelburg stated that such a measure would also allow prostitutes to work in anonymity, “away from photo-taking tourists.”

The red-lit glass doors have been a big crowd puller, and the councilors also hope that by relocating prostitutes to another place, the area would become less attractive to tourists.

“The fact that prostitution is concentrated in the Red Light District is not an argument to leave it that way: if you find it too busy, or if you hear that those women do not like it any more, you should not ignore a discussion about an alternative. Is this how you want to attract people to your city?” said Nicole Temmink, a councilor for the Socialist party.

Strict Rules Set for Amsterdam's Red Light District Brothel Owners
In addition, many regular customers are now able to call prostitutes via the Internet and meet them at home or hotels, so the famous windows are being left empty.

Amsterdam’s first female mayor, Femke Halsema, who is a member of the Groenlinks party, is expected to lay out her vision on prostitution next year. She earlier said that there are “no taboos at all” when it comes to cleaning up the De Wallen Red Light District and making it more habitable.

The Dutch government legalized prostitution in 2000, with both sex workers and brothels bound to pay taxes. Owners of sex business are also required to obtain a permit and abide by municipal rules.