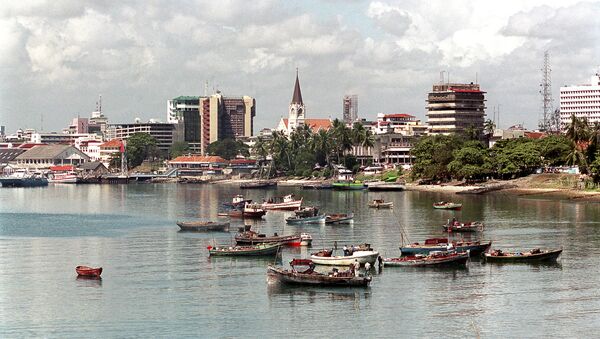 © RIA Novosti . Dmitry Korobeinikov
/
Go to the photo bank
Subscribe
The governor of Tanzania’s largest city has announced the formation of an “ad hoc team” to track down LGBTQ people on social media and called on the public to report suspected homosexuals. He has reportedly already been given a list of thousands of names.

Paul Makonda, governor of Dar-es-Salaam, Tanzania's largest city and de facto capital, said at a news conference Monday that he was forming a 17-member squad to track down and punish same-gender couples in the country.

"These homosexuals boast on social networks," Makonda told AFP. "Give me their names. My ad hoc team will begin to get their hands on them."

The committee further warned citizens to delete "sex pictures" on their phones, lest they be arrested and "educated" about the "moral erosion" of homosexuality. Punishment can include up to 30 years in prison.

The Independent reported Thursday that Makonda's team had been given thousands of names, and Makonda had received 18,000 messages of support for his crusade, many of which also named individuals suspected of being gay or bisexual.

Makonda told AFP that he expected to be internationally condemned for his actions, but replied: "I prefer to anger those countries than to anger god."

It's not the first time Makonda has gone after the LGBTQ community, either. In July 2016 he made a similar announcement, stating, ‘"If there's a homosexual who has a Facebook account, or with an Instagram account, all those who ‘follow' him, it is very clear that they are just as guilty as the the homosexual," The Guardian reported.

While no prison punishments were handed out as a result of that purge, Dar-es-Salaam police raided gay bars in the area and charged dozens of men with prostitution and loitering, although all were ultimately released. However, the episode is credited by James Wandera Ouma — the founder and executive director of LGBT Voice Tanzania, one of the only registered organisations openly promoting LGBT rights in the country — with having changed the mood of the country following the election of conservative President John Magufuli in 2015, who is a close ally of Makonda's and has been nicknamed "The Bulldozer" for his strict policy agenda.

"Makonda has made people believe that it is now OK to hate LGBT people, especially gay men. He has planted a hate that was not there before," Ouma told The Guardian at the time.

Home Affairs Minister Mwigulu Nchemba said at the time that "those who want to campaign for gay rights should find another country that allows those things."

Shortly after Makonda's first crackdown, Tanzanian Justice Minister Harrison Mwakyembe announced a partial ban on the importation of body lubricants — ostensibly to "curb the spread of HIV," The Guardian reported, followed by a ban that October on HIV/AIDS outreach projects aimed at sex workers and men who have sex with men. The following year, Magafuli shut down 40 HIV/AIDS testing and treatment centers for vulnerable populations, and in December of that year he had 13 human rights activists and lawyers arrested for "promoting homosexuality."

UN AIDS estimates that 1.5 million Tanzanians have Human Immunodeficiency Virus (HIV), which causes Acquired Immunodeficiency Syndrome (AIDS), from which 32,000 Tanzanians will die in 2018. The UN estimates there will be 65,000 new HIV infections in Tanzania in 2018. Avert notes the country's "extensive" anti-retroviral treatment program and praises its needle exchange program as among the largest in Africa. However, it also notes that men who have sex with men are by far the largest part of the population infected with HIV, and they remain the most difficult to reach, with only one quarter being reached by any sort of prevention program, according to a 2014 Tanzanian Ministry of Health report.

While Tanzania has no law banning homosexuality, a law in the Tanzania Penal Code of 1945 criminalizes "any act of gross indecency with another person." It's part of a colonial legacy of homophobia spread around the world by European empires and codified into their law systems, many of which were retained by the indigenous governments to which power was handed over at the time of independence.

Section 138A of the penal code states, "Any person who, in public or private commits, or is a party to the commission of, or procures or attempts to procure the commission by any person of, any act of gross indecency with another person, is guilty of an offence and liable on conviction to imprisonment for a term not less than one year and not exceeding five years or to a fine not less than one hundred thousand and not exceeding three hundred thousand shillings," extending that prison term if the other person is under the age of 18.

Tanzania's colonial legacy includes German colonization and then British. Great Britain ruled the territories of Tanganyika and Zanzibar until granting them independence in the early 1960s, after which they formed the single country of Tanzania. The East African country is one of 42 former British colonies that continue to retain their colonial-era anti-sodomy laws, Quartz noted; other countries, such as South Africa, Belize, India and Pakistan, have overturned them.

In September, India's Supreme Court scrapped Section 377 of the Indian Penal Code (IPC), introduced by the British in 1861, which equated trans people with their biological reproductive organs and same-gender love with bestiality and pedophilia, prescribing horrific punishments that included lashing and death by stoning. The decision followed the passing of a monumental transgender and third gender rights law by neighboring Pakistan in May that overturned the same IPC law in that country, Sputnik reported.

000000
Popular comments
"I prefer to anger those countries than to anger god." that is the truth