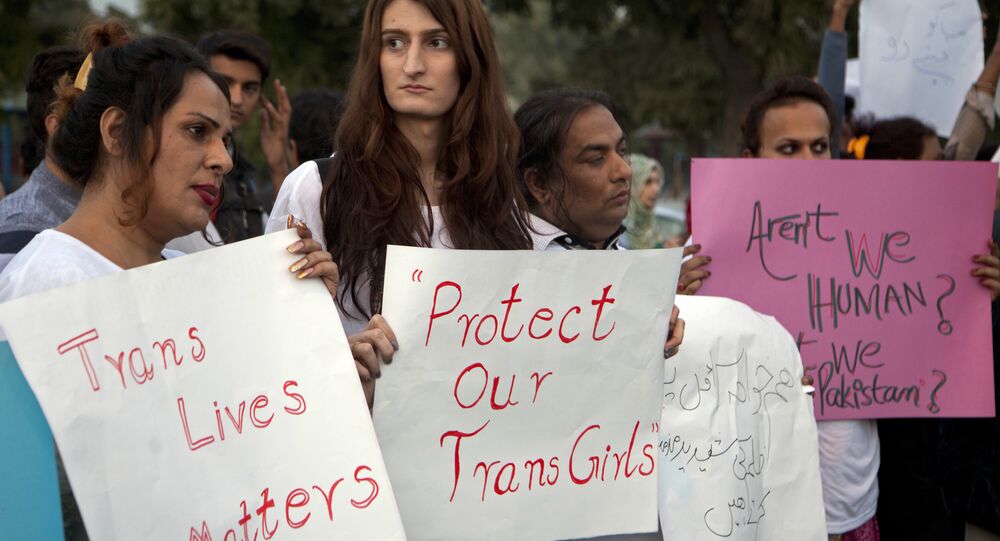 Pakistan’s National Assembly approved a bill Tuesday that will grant transgender and khawaja sira or third gender people in the country sweeping legal equalities and protections that activists say are “unprecedented” and “will go towards paving the way for betterment of the community."

"This is a very happy day for everyone," Bindiya Rana, a prominent transgender activist, told geo.tv Tuesday. "The hard work of all khawaja sirahs has come to fruition today… continuous campaigning for equal rights has helped the country achieve this milestone."

© Sputnik / Mikhail Voskresenskiy
For the First Time Ever: Pakistan to Send Transgender Youth to Saudi Arabia for Hajj

Khawaja sira is a third gender in some South Asian societies, including India and Pakistan. They are more popularly known abroad as Hijras, although Pakistanis say this is an offensive term.

Syed Naveed Qamar of the Pakistan Peoples Party championed the Transgender Persons (Protection of Rights) Bill 2018 in the National Assembly. The bill passed the Senate in March. Now, all that stands in the way of the bill becoming a law is the signature of Pakistani President Mamnoon Hussain. Hussain has 10 days to decide to veto or sign the bill or it will automatically become law.

The protections the bill provides are numerous and include the ability to obtain a driver's license and passport; the option to change one's gender in National Database and Registration Authority (Nadra) records; the prohibition of harassment at home and in public; protection from discrimination by educational institutions, employers, health and trade services, as well as on public transportation and in buying, selling or renting property; equal right to the inheritance of property; the right to vote in elections for all levels of government and equal right to pursue public office; separate rooms for detainment in jails; government-established "safe houses" that will provide medical and educational facilities and psychological counseling; and a government promise to ensure equal employment opportunities. In addition, a penalty of 50,000 rupees ($432) will be issued to people who force trans people to beg.

Kami Sid, a transgender activist who is also Pakistan's first trans model, told Images Tuesday, "This bill is a collective approach of the people and it's a wonderful move. It talks about important issues concerning the trans community and highlights their inclusiveness in society."

"I want this to be remembered each year as National Trans Day," she said. "We've been a neglected minority for so long but we're now proving that we can do so much for ourselves. We'll see more success stories in the future."

Marvia Malik, Pakistan's first transgender news anchor, who is also a civil rights activist and proponent of the bill, told Images in a March spotlight interview on her career that trans and khawaja sira people "are forced to dance and beg because they have no other means to make ends meet. When they are shunned by families, they have nowhere else to go. My trans friends who have masters degrees don't have jobs which is why they end up on streets or become sex workers. This is why I want to push for a law so a transgender, if disowned, can make a living out of the share in property."

Another activist, Mehlab Jameel, from the NGO Naz Pakistan, told Images they were "still in a state of disbelief." They noted the alliance of groups and organizations that had their input in the bill and made this victory possible.

It's official! Just confirmed NA passed the Transgender Persons Bill in original form as passed by Senate. Will be signed into law by the President. THIS IS HUGE!
The Bill was drafted with collective input from community, trans activists & feminist allies. It's a win✌

"I am very happy and thankful to the parliamentarians who took this initiative forward," they told Images. "This was a collective effort of the community and its wonderful allies, specially Feminist Collective. The bill incorporated input from all stakeholders from diverse backgrounds and went through a long and stringent process. This bill is unprecedented in its nature and will go towards paving the way for betterment of the community."

"We are making history," they said. Jameel also noted in a later tweet how this was also "the beginning of the undoing of history, of colonial regimes of legality." Some of the most virulently anti-LGBTQ laws in South Asia date to the Indian and Pakistani Penal Codes of 1860, imposed by the British Empire, which ruled the region until 1947. It equated same-gender love (and equates trans people with their biological reproductive organs) with bestiality and pedophilia and prescribed horrific punishments that included lashing and death by stoning.

So the Bill we have been working on has finally been passed by the Senate. It's a big moment for everyone who contributed to this. But it also came with sombre realizations.
My dear comrade Jannat Ali & I have decided to put some of our thoughts based on our experiences out here. pic.twitter.com/9FdiwkFpdq

— Mehlab (@mehlabjameel) March 8, 2018The bill's provisions have broad support in Pakistani society. A 2017 poll carried out by ILGA found that 49 percent of Pakistanis believed trans people should have the same rights as cisgender (non-trans) people, 51 percent believed they should be protected from employment discrimination and 44 percent said they believed trans people should be allowed to change their legal gender.

However, the bill's passage comes too late for Muni, a trans woman who was murdered May 4 in the northwestern Khyber Pakhtunkhwa province. Human Rights Watch reported at the time that Muni was shot after she was unable to produce change for a 1,000 rupee note to be used to "shower" transgender dancers at a wedding. She was the fourth trans person killed in Pakistan this year and the 57th since 2015, according to data collected by HRW.

Last year, Pakistan's Azcorp Entertainment joined the cultural struggle against transphobia, announcing it was launching a new comic book, "Basila & the Street Crew," that tells the story of a young orphaned girl who is raised by a transgender woman. Co-creator Anain Shaikh noted, "I wanted the transgender characters to be 'normal' and not caricatures… I didn't want any stereotypical moves or looks for them. That would defeat the purpose, if they are sort of funny. To counter that, we delved into their personality," Images reported last August.

In addition, Lahore recently established an old-age home for the city's large transgender community, which is reckoned to be above 10,000 people, the Tribune Express reported April 30. The facility will provide housing and medical care for Lahore's elderly trans community free of charge.