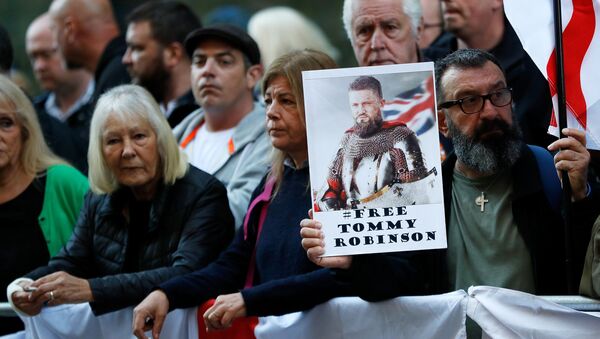 The controversial British activist was arrested on contempt of court charges earlier this year for filming inside Canterbury Crown Court while four suspected rapists were being tried.

Tommy Robinson, whose real name is Stephen Christopher Yaxley-Lennon, has been invited to the US to speak at a closed-door conservative event and publicly address Americans in Washington.

The Middle East Forum, seven members of congress, and the David Horowitz Freedom Center, invited Robinson on Wednesday to give a talk at the Conservative Opportunity Society in November, provided legal proceedings against the activist end favorably and permit him to travel abroad.

In a press release, the ME Forum accused the British government of “attempting to silence criticism of Islamism”, adding that Robinson will shed light on the matter and his work confronting Islamist extremists during his visit to Washington.

Furthermore, the organization vowed to “continue to support Mr. Robinson personally, as well as the general right to publicly discuss controversial subjects – including those related to Islam – without facing legal jeopardy.”

The group has lobbied the US government to pressure the UK throughout Robinson’s recent legal proceedings, also issuing numerous statements in support of him and his activism.

Tommy Robinson on UK Establishment: They Want to Make Me a Pariah
Robinson founded the English Defense League (EDL) almost a decade ago to battle radical Islam in the UK, warning that authorities were unable to tackle the issue due to political correctness.

In August, researchers found support for Robinson to be surging as a result of the legal proceedings against him, with supporters from across the world donating thousands of dollars via crowdfunding platforms to cover his legal fees.

Seemingly on the rise, the activist is looking to reenter politics with the UK Independence Party (UKIP), and the party’s national executive committee is set to review whether or not he is a suitable candidate.