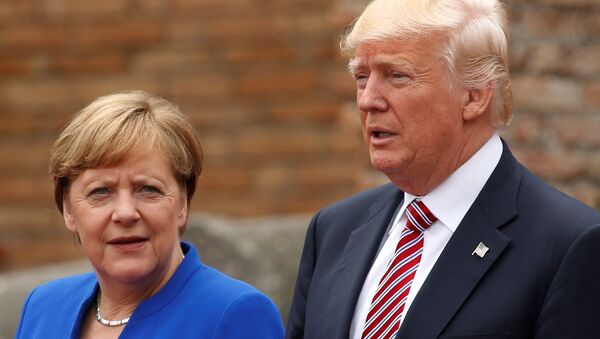 The German government plans to give in to Donald Trump’s criticism about dependence on Russia’s fuel and pour millions into a liquefied natural gas terminal. This is expected to diversify Germany’s energy import, open it up to US gas and possibly avert hostile moves against the Nord Stream 2, the Wall Street Journal reports.

Germany’s Chancellor Angela Merkel has told the country’s lawmakers that the Cabinet is set to co-fund the construction of a liquefied natural gas (LNG) shipping terminal over breakfast this month. The $576 million project would be located in northern Germany, the US business outlet reports, citing the sources familiar with the meeting.

It’s unclear how exactly Germany would support the project, as it could use subsidies, loans, credit guarantees, or protection of investors’ rights.
According to the WSJ, one of the first applications was received from an international consortium in mid-October. It plans to construct an LNG terminal in the town of Stade, close to one of the country’s biggest cities, Hamburg.  The decision is to be made by yearend.

This move is expected to ease tensions between the US and Germany, and even shield the Russian-European joint venture Nord Stream 2 from possible US sanctions, according to the WSJ sources. The chancellor herself reportedly perceived this measure as a strategic decision rather than a diplomatic defeat from the US.

Donald Trump has been promoting American LNG in a bid to boost its exports to Europe. In July 2017, he pitched the product to 12 Central and Eastern European nations as an alternative to energy imports from other suppliers.

"You can never be held hostage to a single supplier," he told a news conference, commenting American LNG.

At the same time, he has repeatedly slammed Europe's reliance on Russian gas supplies. Apart from the vocal criticism, the United States has made a number of attempts to impede the implementation of the Nord Stream 2 project and even incorporated a provision for counteracting the construction of the pipeline in its Countering America’s Adversaries Through Sanctions Act.

Germany has repeatedly fought off the criticism. Berlin described the Nord Stream 2 project as a rational one, considering the growth of Germany's demand for exported gas in the coming years.

Nevertheless, Merkel’s government is turning towards alternative natural gas suppliers in a bid to ease its dependence on Russia, which provides 60 percent of the gas Germany imports and plans to expand with Nord Stream-2.

At the beginning of its term, Merkel’s Cabinet has tasked itself with reducing Germany’s dependence on natural gas imports via pipelines from Russia and Norway. The new government plans “to create infrastructure for liquefied natural gas (LNG)” from scratch as a part of its energy and climate program.

According to Germany’s Economy and Energy Ministry, Merkel endorses all initiatives which support the further diversification of the gas supply — whether from different regions or the means of transporting gas, while the government strongly backs private initiatives to build LNG terminals, which Germany now lacks.