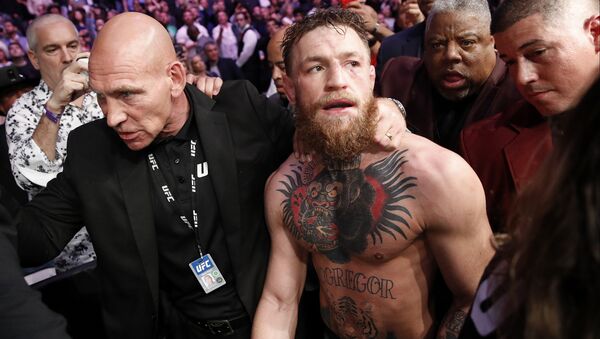 © AP Photo / John Locher
Subscribe
Following the surrender of his Irish opponent in the octagon, the Russian athlete threw himself onto a McGregor team member, who had reportedly been insulting Khabib throughout the fight. This provoked mayhem that involved both fighters and their teammates and may result in "the Eagle" receiving a hefty fine.

The Nevada State Athletic Commission (NSAC) will be looking into the actions of both Conor McGregor and Khabib Nurmagomedov following their match on October 6, despite initially seeing the Irish fighter as the victim, NSAC chairman Anthony Marnell told ESPN. According to him, a previously unpublished tape has given new insight into McGregor's involvement in the post-fight melee. The tape reportedly shows McGregor hitting a Khabib team member several times as he tried to rush out of the octagon.

"We will be filing against Conor McGregor and Khabib Nurmagomedov. Because we withheld one purse, we will have to move expeditiously to a complaint and hearing. We're shooting for a final hearing date in November," Marnell said.

READ MORE: McGregor Reportedly Suspended for Month After Being Beaten by Khabib

Although Khabib's winnings remain in limbo, the fighter and UFC head Dana White exchanged jokes on social media. The Russian fighter posted his photo with the UFC title belt jokingly saying that it was smart of White to give the belt to him in the end, because otherwise Khabib would smash his car. The UFC head liked the joke and responded by writing "LOL. I'll tell your father," obviously referring to the promise of Abdulmanap Nurmagomedov to punish his son for causing a ruckus after the fight with McGregor.

@danawhite you lucky that you give my belt, or I would smash your car, I know your parking location 😎 #SendmeLocaition

The jesting exchange was well received by the Russian fighter's fans. A user named alex_snow_tattooist wrote: "Careful Dana, his dad is already going to give him a bollocking."

Others were not so fond of his joke and suggested he would never do such a thing. The user, named 13hejjesan37, wrote: "And you would go to jail for that for 6 years. Who are you trying to trick? You wouldn't dare even touch it." Another user, named _andrei_simion_, wrote "With this attitude (even if this was a bad joke) you prove that you are no different than your opponent and none of you deserves to be in the UFC."

Some users suggested that he should smash White's car anyway. A user named rockdroid_music wrote: "Dana is a corrupt dog, u should smash his car."

Conor McGregor and reigning lightweight UFC champion Khabib Nurmagomedov met in the octagon on October 6 in a much-anticipated fight. The Russian athlete emerged victorious in the fourth round after McGregor submitted following a successful neck-crank by Khabib. However, after the fight ended, Nurmagomedov rushed out of the octagon and assaulted McGregor's teammate Dillon Danis, who had allegedly insulted the Russian fighter throughout the bout. The Irish fighter and Khabib's teammates also got involved in the post-fight melee.