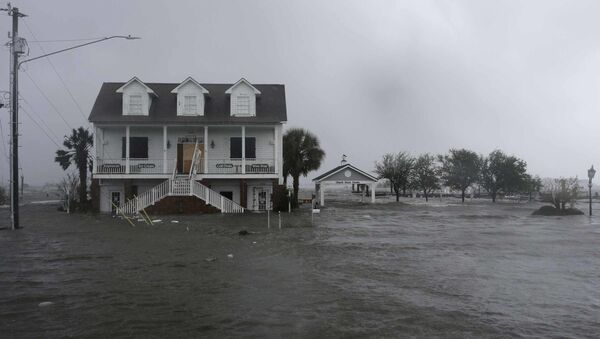 Hurricane Florence made landfall on the United States Friday morning, with the eye of the storm moving ashore at Wrightsville Beach, North Carolina, at around 7:15 a.m. local time. It’s weaker than expected, but is slow-moving and has brought torrential downpours and record storm surges that are inundating communities in feet of water.

Once the storm's eye was ashore, it quickly began to weaken, and by 5 p.m. local time was downgraded from a hurricane to a tropical storm, as its strongest sustained wind speeds fell below 75 mph, CBS noted.

Florence hits the Carolinas. Here are a few images from our journey around the area. @CBNNews #HurricanFlorence #NorthCarolina #WilmingtonNC pic.twitter.com/hsqneQVZRp 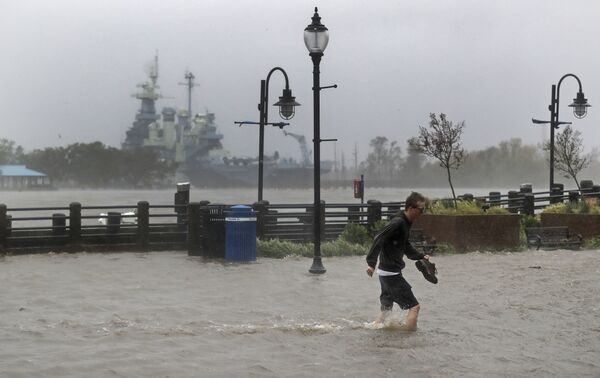 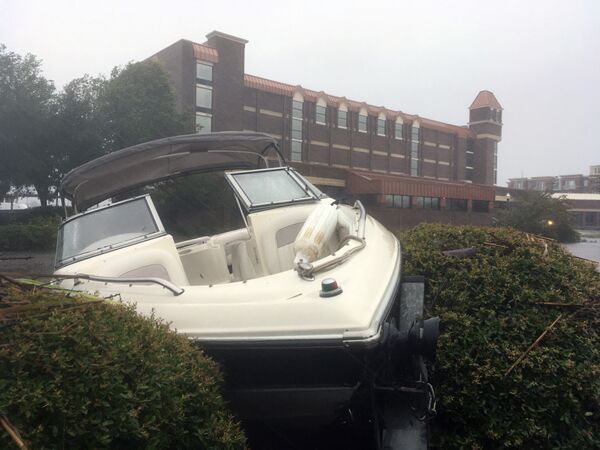 A speed boat sits wedged in bushes in the parking lot of a waterfront hotel in New Bern, N.C., on Friday, Sept. 14, 2018. Winds and rains from Hurricane Florence caused the Neuse River to swell, swamping the coastal city.
© AP Photo / Allen G. Breed

Five people are dead in the Carolinas due to the storm, the Associated Press reported Friday evening.

A mother and her baby died when a tree fell on their home; an old woman died of a heart attack when emergency vehicles were unable to reach her home due to the storm; a man was electrocuted connecting extension cords outside his home; and an old man was killed when the storm forcefully blew him down while he was checking on his hunting dogs, The Weather Channel reported.

​Over 750,000 homes and businesses are without power as the storm tears down trees and electrical wires.

​Nearly 2,100 flights have been cancelled through Saturday as a result of the storm.

In all, 11 million people live in the areas placed under storm watches and warnings by the National Weather Service.

@al_ratcliffe and I made our way up to Briarcliffe Acres this afternoon. By far, this is the worst tree damage we’ve come across. #HurricaneFlorence #Florence @WBTWNews13 #SouthCarolina pic.twitter.com/WNiZgRKsOX

​​As Florence's outer rain bands neared the eastern shores of the United States, the storm's powerful winds and low air pressure pushed the sea inland, forming record-high storm surges. At Cape Fear, North Carolina, the sea was 8.27 feet higher than normal, according to the National Weather Service. The sea was also pushed up rivers, meaning that even towns far from the coast have been inundated under feet of water.

Cape Fear River at Wilmington has reached an all-time high level of 8.27 feet — this beats past records from Matthew (8.2') and Hazel. pic.twitter.com/lgfGxwoQqv

​The NWS had issued flash flood emergencies across several North Carolina counties by Friday evening, citing the nearly two feet of rain that have already fallen in Carteret, Jones, Craven and Pamlico counties. Another 4 to 8 inches of rain is expected overnight.

​FEMA has carried out numerous water rescues, including one of over 150 people in New Bern, North Carolina, a riverfront town in Craven County, north of the eye of the storm but lashed by severe rain bands.