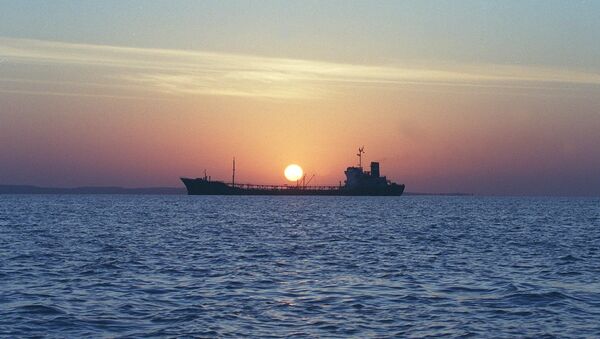 © AFP 2021 / HENGHAMEH FAHIMI
Subscribe
The report comes shortly after Iran warned that it would shut down the strategic waterway of Strait of Hormuz if the United States followed through with its threat to bring Tehran's exports “down to zero.”

UAE-based Khaleej Times daily has cited a US Central Command (CENTCOM) officer, identified as Major Josh Jacques as saying that the US partners with “many nations to provide and promote security and stability in the region.” The report, however, doesn’t directly refer to the Persian Gulf region.

“Together, we stand ready to ensure the freedom of navigation and the free flow of commerce wherever international law allows,” Jacques allegedly added.

The announcement comes on the heels of threats from Iran to close the Strait of Hormuz, thus cutting off the main oil shipping route in response to any hostile action from the US.

"The IRGC Navy's preparedness and capabilities unsettle the aggressors before entering the Strait of Hormuz, and [this is why] they have adhered to international laws over the past year. And, should they overstep that, they will face the IRGC Navy's response and restraining measures. […] Thanks to the Revolutionary Guards' Navy, hostile countries are worried before crossing the Strait of Hormuz," local media cited Bagheri as saying.

"In the Persian Gulf, the IRGC Navy and in the Sea of Oman, the naval forces of the Army are prepared to defend the waters with their intelligence dominance and monitoring of the enemy's physical presence. The enemy is using the ploy of [alleged Iranian threat] to have a presence in the region and sell arms. Their presence in the region is detrimental to security and does not bring about any security," he said.

Currently, the US 5th Fleet is deployed in the Persian Gulf with carriers, ships, strike aircraft, sailors and marines.

Following Washington's unilateral withdrawal from the 2015 Iran nuclear deal, the US has been ramping up pressure on the Islamic Republic, threatening to impose tougher sanctions to drive Iranian exports down to zero.

000000
Popular comments
From chemicals in Syria to Donensk to Syria to hormaz. And so the pieces shift as do the eye's of the masses; WE of the opposing thumb SEE a time old strategy that hath consumed many civilizations before New Babylon. To fight one's battles for one's homeland, one's people, one's loved one's is TRUTH, as New Babylon hath found in "MANY" sovereign nation's... This strategy, "MANY" is in any language a some what fòólhardy task.. to spread one's military over such a very very large battlefield is in the mind of the vacant. The logistics for said battlegrounds be astounding, the trillions will diminish, hench NO more HUMAN rights, NO more Palestine aid, NO more Pakistani aid NO WTO.... soon, NO more NATO, ALL monies to return to New Babylon shores to bolster a failing economic system.... WE Of the opposing thumb SEE! The failures of yet another self proclaimed power ... THIS vacuum will BE worthy of comments me thinks... So! Now WE be in the straights; where to next shall the eagle and it's brood take us LMMFAO

Zheaan Ra
2 September 2018, 11:45 GMT
000000
The US might make its threats, but all the cards are with Iran. No matter what the US does (esp if it acts militarily!) will only exacerbate the situation. Iran has only to sink one oil tanker for the rest to cease operations entirely - the risk would simply be too great - and no one would insure their tankers anyway after that.