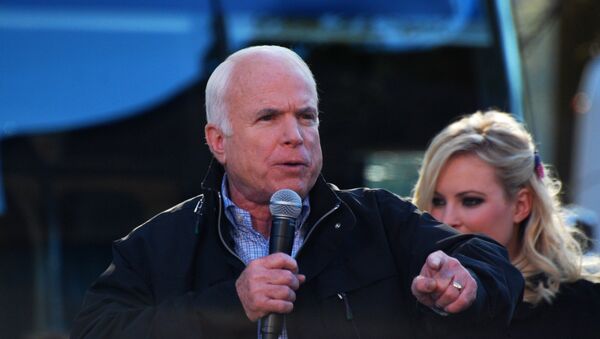 CC BY 2.0 / Rona Proudfoot /
Subscribe
International
India
Africa
Some netizens criticized the US broadcaster for showing an episode of a talent show with two men dancing in dolphin masks right after it announced US Senator and Vietnam War veteran John McCain had died. Others just made fun of the media outlet for an “awkward gaffe.”

The timing of the solemn announcement of Senator John McCain’s death, who passed away at the age of 81 following a battle with cancer, has landed US broadcaster NBC in hot water. The network reported about the somber event and cut back to an episode of “America’s Got Talent,” where two half-naked corpulent men in dolphin masks were dancing, kissing and making dolphin-like sounds with equipment. The duo, named the Japanese Belly Guys, performed an act they had named a “Dolphin Love Story.”

​Abruptly switching from the sad news about the death of the 2008 GOP presidential candidate, long-time Senator and  Vietnam war veteran, has triggered a fierce Twitter debate.

​The mishap breathed new life into hashtag #DolphinLoveStory, as some users shared their astonishment.

#DolphinLoveStory —level will be a new way to describe a degree of timing badness.

​There were those who just had fun and joked about the gaffe.

Not sure #dolphinlovestory is the worst McCain rememberence

NBC: John McCain has died. Now back to your regular programming. Wtf? https://t.co/5G9HyAbQlo

Well, this is bad. 😧 NBC decided to pay tribute to John McCain last night and it got super weird… 🐬🐬 WATCH: https://t.co/aYbZE7rVxd pic.twitter.com/EfRh3NVcG8