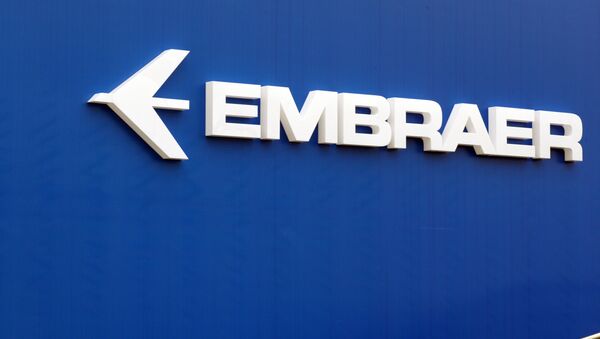 © AFP 2021 / ERIC PIERMONT
Subscribe
The Chinese are preparing to enter the Brazilian aviation industry with its famed twin-engine planes and manufacture them locally, a business executive said on Tuesday.

Aviation Industry Corporation of China (AVIC) representative Jose Santos told Xinhua news that his company plans to commercialize the first Chinese plane and set up a plant in Brazil.

"This is a low-cost, broad-capacity plane. It carries 18 passengers and it's coming to fill a demand that is not being fully met in the Brazilian aviation market [for] regional aviation," Santos mentioned. "There [are] a lot of [air connections] between the larger cities, but not (the smaller ones) in the interior, especially in regions like the Amazon."

It is night, and I’m at #LABACE2018 and the show is just getting started. Makes me wonder why we shut down at 6 pm at all the other aviation shows. LABACE rocks! @AINonline pic.twitter.com/51Udv2FCl8

AVIC hopes to make way into Brazil's growing aviation industry with the Y12E turboprop and is the first time LABACE has showcased an Asian manufacturer. The turboprop is considered AVIC's most competitive aircraft, costing around $5 million.

"The entire world is eyeing the potential of the Brazilian market because of Brazil's size and reliance on general aviation, as commercial aviation only reaches 100 towns out of more than 5,500," ABAG CEO Flavio Pires said.

Beijing is ambitiously modernizing and expanding its aviation industry, most recently with the Sky Star-2 hypersonic waverider vehicle. The China Academy of Aerospace Aerodynamics released a video August 3 of the vehicle, which successfully detached from its launch vehicle and began a 10-minute high-altitude maneuvering test.

READ MORE: How Does China’s Stealth ‘Weilong’ J-20 Warcraft Stack Up to the US F-22 Raptor?

The vehicle is one of many groundbreaking technologies that has spurned competition amongst the world's foremost military powers. Russia is set to release its Avangard hypersonic boost-glide vehicle by late 2018 or early 2019. The US is designing its Boeing X-51 unmanned scramjet aircraft, after the US Air Force made preparations to catch up its hypersonic weapons program to China and Russia's.

READ MORE: Why US is Increasingly Uneasy With China's New Space Station in Argentina

China also made its way into Latin American countries with a new space station based in Patagonia, making US officials raise a few red flags.

The installation began operating in March 2018 after former Argentinian president Christina Fernandez de Kirchner and Chinese president Xi Jinping. The two heads of state signed the 50-year agreement in April 2014 and the Argentinian parliament approved in in February 2015. China currently operates additional installations in Pakistan, Namibia and Kenya, the Diplomat reported in 2016.