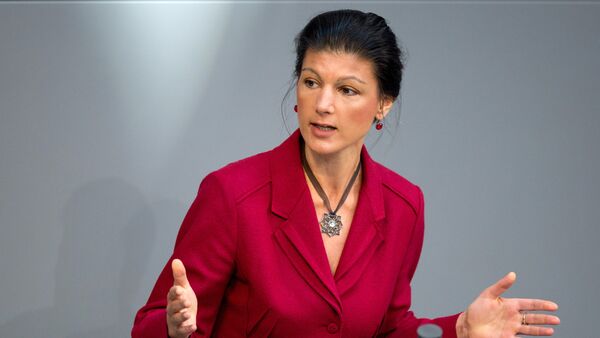 Relations between Moscow and Brussels have deteriorated significantly since the coup in Ukraine led to Crimea's reunification with Russia in 2014. After the US, EU and several countries sanctioned Russia over its alleged interference in Ukraine's domestic affairs, Russia launched counter-sanctions.

In an interview with the newspaper Frankfurter Allgemeine, the leader of Germany's Left Party Sahra Wagenknecht specifically focused on what she described as the Trump administration's "aggressive ways to pursue its interests across the world."

According to Wagenknecht, Washington's interests are out of line with those of the EU when it comes to the resolution of the most important issues, including economic ones.

"By waging its resources-related wars, the United States has destabilized the Middle East and continues to do so in Iran, while Europe is paying the price. We should not comply with a policy that contradicts our interests," she pointed out.

Wagenknecht added that the EU's unfriendly relations with Russia run counter to the interests of the bloc, which should seek to bolster fruitful ties with Moscow.

"The United States has always been afraid of Russian resources being united with German technology and rightly so," she concluded.

Commenting on the EU extending its economic sanctions against Russia until January 31, 2019 in early July, Russian Foreign Ministry spokeswoman Maria Zakharova said EU leaders had missed a chance to change their relationship with Moscow.

EU Has No Aggressive Policy Toward Russia - Macron
She added that Moscow regrets that EU countries continue to tie the level of relations between the bloc and Russia to the success of the Minsk peace accords on the resolution of the crisis in eastern Ukraine given that Kiev was still undermining peace in the region.

Relations between Russia and the EU deteriorated amid a coup in Kiev in February 2014. After the people of the Crimean Peninsula held a referendum and voted to reunify with Russia, the Western states accused Moscow of violating international law and imposed anti-Russian sanctions. Moscow responded with agricultural counter-sanctions, also setting a course for import substitution.