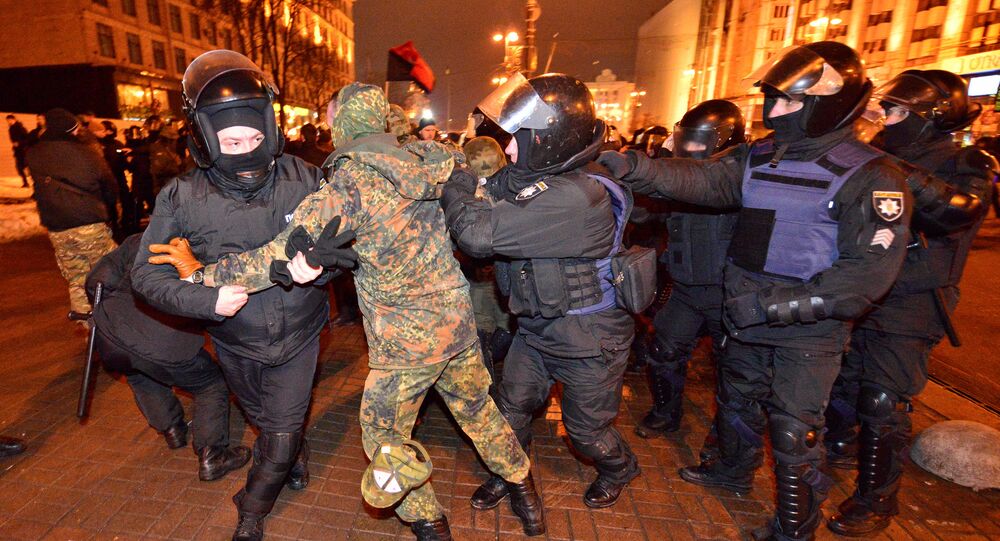 Starting last Friday and expected to continue into Wednesday, Kiev is facing mass demonstrations to commemorate the 2014 Maidan coup d'état, which led to the ouster of Ukraine's democratically elected president and three years of chaos. Mindful of the precedent, authorities are doing everything they can to keep the protests under control.

Between February 18 and 22, 2014, pro-EU protesters, riot police and mysterious shooters fought it out in the streets of the Ukrainian capital, resulting in the death of 100 protesters and 13 police officers, many of them by sniper fire, and the ouster of unpopular but democratically-elected President Viktor Yanukovych.

Three years have passed, but the political and social unrest caused by the coup has yet to die down. The center of Kiev has again turned into something reminiscent of a martial law situation as riot police and security forces decked out in army gear have formed to prevent clashes from getting out of control.

"A human wall made of police in the center of Kiev."

About five thousand police officers and soldiers from the National Guard descended on the Ukrainian capital over the weekend, setting up filtration checkpoints to verify documents and inspect belongings, including the use of bomb-sniffing dogs. A total of about 200,000 protesters are expected to participate in over two dozen separate rallies before the commemorative week is through.

"More and more police units being deployed in Kiev."

On Sunday, clashes broke out between Maidan activists and police over the so-called trade blockade of the breakaway Donetsk and Lugansk People's Republics, resulting in one policeman receiving serious injuries, and ten protesters hurt (one seriously); at least half-a-dozen more protesters were detained. Several hundred protesters had tried to break through a police cordon and set up tents near the Presidential Administration building, with the police preventing them from doing so, and fighting breaking out as a result.

© REUTERS / Valentyn Ogirenko
Riot police and members of the Ukrainian National Guard block activists and supporters of nationalist parties during a rally against trade with Ukraine's rebel-held east areas in Donetsk and Luhansk regions, in Kiev, Ukraine

"In clashes on European Square, one policeman was seriously injured; 5 protesters were detained."

"Clashes between police and protesters at the Presidential Administration building."

© Sputnik / Vitaliy Belousov
'Deadlock': Donbass Blockade Risks Plunging Ukraine into Energy Collapse
Last month, a group of nationalist veterans of the fighting in the Donbass, led by two lawmakers, blocked off several rail routes from the Donbass breakaways, claiming trade with the anti-Kiev territories was illegal. The government feebly criticized the activists' efforts, saying that the coal supplies coming from the region were crucial for ensuring Ukraine's energy security. Police have since announced that criminal cases have been initiated against those involved in the blockade, but have yet to make any effort to end it. Instead, Kiev has introduced emergency measures in the energy sector to try to prevent rolling blackouts from crippling the country's electricity grid.

Protests are expected to continue into Monday. In the morning, people carrying flowers and commemorative candles began arriving in the center of the capital to commemorate those who were killed in clashes three years ago.

© Sputnik / Stringer
Lawmaker Reveals Why Ukrainian Parliament Keeps Breaking Out in Fisticuffs (VIDEO)
The mysterious snipers, thought to be have been responsible for a majority of the deaths of protesters and police alike, have yet to be found or prosecuted. Instead, the deaths of the protesters have been blamed squarely on ousted President Yanukovych and the Berkut riot police. Yanukovych has denied giving any orders to fire on the protesters, and had agreed, as per the peace deal arbitrated with the help of European foreign ministers, to withdraw police from Kiev, just hours before getting overthrown.

Later on Monday, more protests are expected to be start in front of the Presidential Administration. Protesters are demanding improved social benefits for law enforcement, and that banks not be allowed to seize debtors' property. Traffic along Khreshchatyk, the main street in Kiev, has been blocked off, and people are reported to be passing through police security checkpoints.

"Military equipment pulled up to the Poroshenko Presidential Administration Building."

On Monday morning, the Kiev police's press service reported that it had confiscated an RGD-5 anti-personnel fragmentation grenade from a protester. The suspicious-looking individual was arrested, and an investigative team was sent to disarm the weapon.