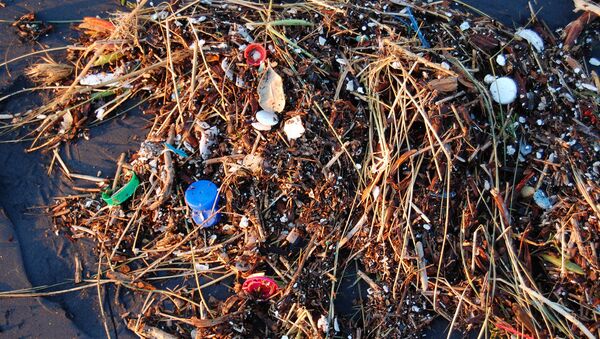 On September 8, a giant sea sieve made up of floating pipes will be launched into the Pacific Ocean to collect tons of refuse from what is called the Great Pacific Garbage Patch.

The Great Pacific Garbage Patch, also known as the Pacific Trash Vortex, is a gyre of marine debris particles in the central North Pacific Ocean, located halfway between Hawaii and California.

​The sieve initiative was created by The Ocean Cleanup, a nonprofit organization founded in 2013 by Boyan Slat, a 24-year-old Dutch entrepreneur, to remove plastic debris from the vortex.

According to The Ocean Cleanup's website, the Great Pacific Garbage Patch is "the largest of the five offshore plastic accumulation ones in the world's oceans."

It is estimated that around 1.15 to 2.41 million tons of plastic are being dumped into the ocean each year from rivers. Plastic debris can harm or even kill dolphins, seals, whales, fish and turtles, according to the organization.

"Studies have shown that about 700 species have encountered marine debris, and 92 percent of these interactions are with plastic. Seventeen percent of the species affected by plastic are on the IUCN (International Union for Conservation of Nature) Red List of Threatened Species," The Ocean Cleanup writes on its website.

According to the organization's website, "The system consists of a 600-meter-long floater that sits at the surface of the water and a tapered 3-meter-deep skirt attached below. The floater provides buoyancy to the system and prevents plastic from flowing over it, while the skirt stops debris from escaping underneath."

The cleanup system also includes solar-powered lights and anti-collision systems to prevent ships from crashing into it. A garbage ship will collect the trash in the net and transport it to shore every once in awhile, where it will be recycled. The contraption is expected to remove about half the Great Pacific Garbage patch in just five years.

"I applaud the efforts to remove plastics — clearly any piece of debris cleared from the ocean is helpful," said Rolf Halden, a professor of environmental health engineering at Arizona State University, told USA Today.

However, he also noted that there is not much value in collecting debris unless efforts are also made to prevent tons of plastic from being dumped into oceans every day.

"If you allow the doors to be open during a sandstorm while you're vacuuming, you won't get very far," Halden added.

Richard Thompson, who leads the International Marine Litter Research Unit at the University of Plymouth in the UK, agrees.

Preventing plastics from entering oceans "should be the focus of 95 percent of our current effort, with the remaining 5 percent on cleanup," according to Thompson.

"If we consider cleanup to be a center stage solution, then we accept it is okay to contaminate the oceans and that our children and our children's children will continue to clean up the mess," he said.

Some researchers are also concerned that the project will only collect plastic pollution at the top of the ocean and won't target microplastics that have made their way down to the sea floor.

"[Plastic debris is] not all buoyant. Some sink, some remain floating at different levels based on their density and the water pressure," said Charles Rolsky, a researcher who studies ocean plastic pollution at Arizona State University, USA Today reported Monday.